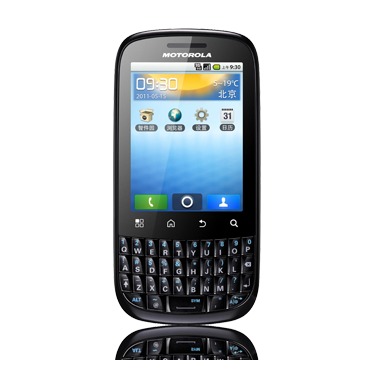 Motorola has given the green light to its latest Android smartphone, a QWERTY-blessed candybar with low-cost ambitions. The Motorola XT316 – which will launch as the Motorola SPICE Key in Latin America, and as the Motorola FIRE in Europe – follows in the footsteps of the DROID Pro, offering a 2.8-inch QVGA touchscreen above a keyboard; on the back there’s a 3-megapixel camera.

There’s also WiFi b/g/n, dual-band HSDPA and quadband GSM/EDGE, along with a microSD card slot, FM radio, GPS/A-GPS and a digital compass. A 3.5mm headphone jack, the usual sensors for ambient light, proximity and orientation, and a 1420 mAh battery good for up to eight hours of talktime or 30 days of 3G standby round out the key specs.

Already on sale in China (as the XT316) running Android 2.2 Froyo with Motorola’s various social networking integrations and Moto Switch UI, the smartphone will arrive in Hong Kong, Taiwan and Latin America sometime this month. It’ll hit the rest of Asia and Europe later in the Summer, with the SPICE Key and FIRE running Gingerbread out of the box; those handsets running Froyo will get a 2.3 update sometime in the fall. No word on pricing, nor on whether the XT316 will make it to North America, though we have seen it cross through the FCC.