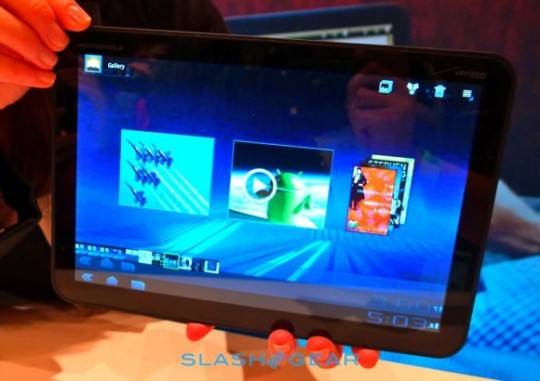 Motorola’s XOOM tablet pricing has been confirmed, with Verizon announcing subsidized and unsubsidized figures ahead of the Honeycomb slate going on sale on Thursday this week. As of February 24, the XOOM will be $599.99 with a new, two-year agreement, or $799.99 with no agreement.

Data plans, meanwhile, will be priced from $20 per month for 1GB of access. The promised 4G LTE update is due to arrive sometime in Q2 at no charge, while Adobe Flash Player will also arrive “soon”. Adobe has already said Flash Player 10.2 for Honeycomb is coming within the next few weeks.

Motorola XOOM Tablet To Be Available On The Verizon Wireless Network On Feb. 24

BASKING RIDGE, NJ, and LIBERTYVILLE, IL — Verizon Wireless and Motorola Mobility, Inc. (NYSE: MMI), today announced the Feb. 24, 2011 availability of the innovative new Motorola XOOM™ tablet, which won the coveted CNET Best of Show award at the 2011 Consumer Electronics Show for being “the most potentially disruptive technology.” The first device to run Google’s new Android 3.0 Honeycomb operating system, the Motorola XOOM will be available for purchase from Verizon Wireless for $599.99 with a new two-year customer agreement or $799.99 without a contract. Wireless 3G data service for the Motorola XOOM will begin at $20 monthly access for 1GB. The Motorola XOOM will be upgradeable to 4G LTE service at no additional charge in the second quarter of 2011.

A powerhouse in both software and hardware, the Motorola XOOM is built around a 1GHz dual-core processor and 10.1-inch widescreen HD display. The sleek, stylish design features a front-facing 2-megapixel camera for video chats, as well as a rear-facing 5-megapixel camera that captures video in 720p HD.

The Motorola XOOM showcases the innovations of the Honeycomb user experience that improves on Android favorites such as widgets, multi-tasking, browsing, notifications and customization, as well as featuring the latest Google™ Mobile services. The Motorola XOOM also features full support for tabbed browsing and support for the Adobe® Flash® Player, available soon as a free download, to enjoy all the video and other rich content available on the Web.