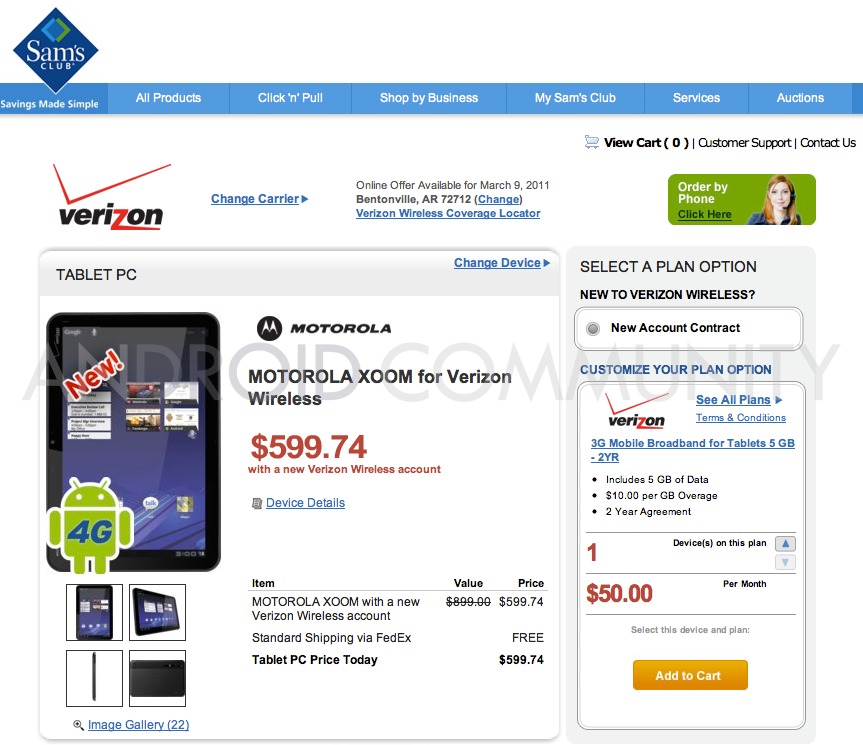 Sam’s Club online now has the Motorola XOOM sitting there looking lovely at $599.74 attached to a 2-year data agreement including 5GB or data at $50 a month with $10 per GB overage fees. This is the 3G version of the tablet (the same one we’ve got here that’ll be able to be upgraded to 4G LTE soon, and it ships free. No sign of the Wifi-only version yet, but heck, you don’t want that one anyway, do ya?

Interestingly, Sam’s Club appears to have facilitated their webpage layout here by displaying the tablet in its upright portrait position with a cool little Android guy standing beside it with “4G” emblazoned across his chest. Of course you and I know that the tablet is still in need of an upgrade from Verizon before it’ll be able to run at 4G speeds, but unsuspecting customers might not be so well informed.

We’ve been rolling hard with this tablet for a couple weeks now, all of our reviews on it and the awesome games and apps on it existing inside our giant [Motorola XOOM] portal. Check it out! At the time of this posting, the most recent review we’ve done is on the game Vendetta Online, a game that’s been based on the PC since 2004, just now able to make the move over to a mobile platform because of the XOOM’s NVIDIA Tegra 2 Dual-core processor. Blast through! — thanks for the tip, Chip!