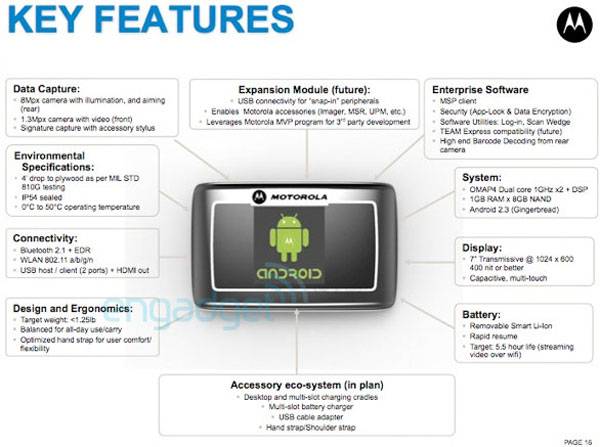 Most tablets and gadgets live in the world of indoor spaces in the home or an office. They might be carried around and used in other places, but most of us keep our gear indoors where it is protected. Some users live their life outside in the service industry or in another business field and a normal tablet will find that it’s a hard life. Life expectancies can be short for a normal tablet with one drop spelling doom for the gadget.

According to Engadget, a source has told it that Motorola has been testing a rugged Android tablet just for the workers that are outdoors all day, but need a tablet that can give access to all sorts of content and will be more likely to survive the rough and tumble world outdoors. The tablet has no official name at this point. According to the image that Engadget has it will run a dual-core 1GHz OMAP4 processor, have 1GB of RAM, and 8GB of NAND flash storage.

The OS will be Android 2.3 and the screen is a 7-inch transmissive 1024 x 600 resolution unit supporting capacitive multi-touch. The rugged design will allow the tablet to survive a four-foot drop onto plywood and the tablet is IP54 sealed. It sports Bluetooth, WiFi, HDMI output, and has a USB port for peripherals. The front camera of the device is a 1.3MP unit and the rear camera is 8MP.