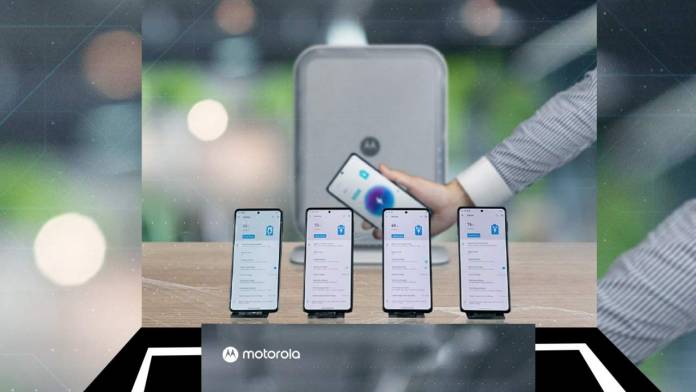 Smartphones with fast charging and even wireless charging are a very common sight these days. While fast charging has reached new highs, wireless charging still – despite the name – keeps us confined to a defined area. Now companies such as Motorola are trying to make over-the-air charging a norm, which should be able to allow users to charge smartphone batteries from a distance.

Over-the-air sounds interesting; it’s something that has been in the works from the likes of Xiaomi and OPPO as well, but nothing really market-worthy has popped up yet. The tech is new to Motorola but seems promising in the demo; still, it is far from ready for the market.

The company terms it Motorola Space Charging. As seen in the demo video released earlier, the tech was depicted as capable of charging up to two devices in one-meter radius. A new demo is shared wherein a router-like device with flickering LEDs on the side and a Motorola logo in the middle is seen powering four smartphones simultaneously at a distance of three meters.

Now, this is really convincing for a couch potato who wouldn’t mind having his phone juiced up without reaching out to the fast charging cable or the Qi charging pad. To make things more interesting, Motorola hints that the tech can charge phones through obstructions midway.

Apparently, Space Charging may stop on detecting a human body in the target area. The concept technology will need a lot of tweaking and testing before it trickles down to the market. Previous charging technologies, wireless charging in particular, underwent years of testing before launching so it’s an acceptable norm.