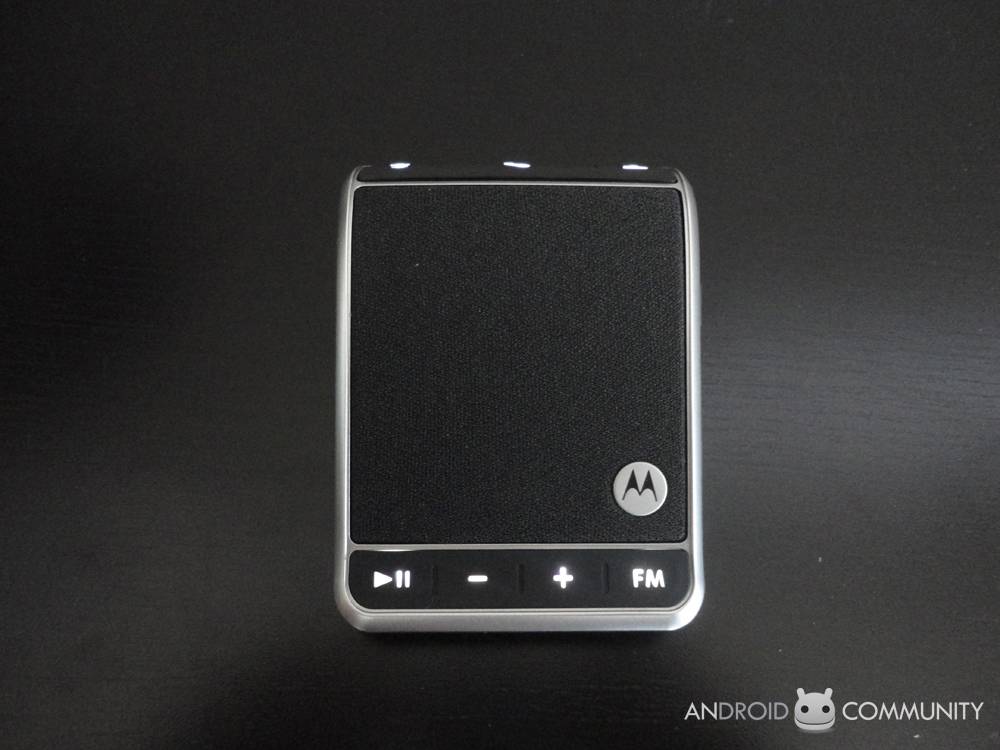 Here we have a rather odd device that we’re surprised wasn’t brought to the market in earnest many moons ago. This is the Motorola Roadster (as it’s called in the USA) Bluetooth In-Car Speakerphone. This device works by itself if you’re just interested in listening to the radio or connected to your Android device. Just think of all the possibilities you’ll have in using your Android device in the car with absolutely no touches to activate all the love you’ve grown to need between stops.

This device is first of all made for making in-car hands-free phonecalls. If you’re the sort of person who has one of those Borg devices popped in your ear 24/7, you’ll probably see no use in this, but for the rest of the everyday humans reading this, a feature such as this is another you’ll find you’re surprised you survived without. The Roadster features dual-mics to work with noise cancellation, working better, Motorola says, than all other speakerphones currently on the market. We’re not really convinced of THAT, but it certainly does come in clear.

Another feature of this device is read-aloud texts. If someone decides to send you a text while you’re driving, you have the option of having that text read aloud, then dictating your response, all of this without using your fingers for a single tap or click. This feature is tested once you’re actually speaking commands and voice-to-text to the device, of course, and although this isn’t the best recognition situation, (meaning we’ve tried the device with several phones whilst reviewing it,) it certainly is more convenient than having to click several times to get to the voice command screen on your Android.

One of the greatest bits about the Roadster is the recognition software pushed forth with its exceptionally high functioning Bluetooth sensor. Each and every time we entered the car, (where we’ve had this device hooked up to our visor above our heads,) the device played a lovely tune and told us exactly which device we were holding and had attached to. Very impressive to say the least. Once the device is connected, you have the choice of using the Roadster as a speaker or as an input for voice commands. We generally used it as a speaker, playing Pandora all the livelong day.

While we were able to control music played on the device that was hosted on the device (meaning everything hosted on our phone as if it were an MP3 player,) we were unable to work Pandora, which is the primary music app we use when we’ve decided to listen to music via our smartphone in the car. This was extremely saddening, but because the audio on the Roadster is fairly good considering the size of the device, and because we love the sounds the Roadster makes when you increase or decrease the volume, we’re giving this inability to work with Pandora outside our smartphone screen a pass.

Take a look back at our Unboxing and Hands-on post for more photos of the device, see the gallery below, and peek at the video above to see a description of the device (under its codename) we received at Mobile World Congress 2011. 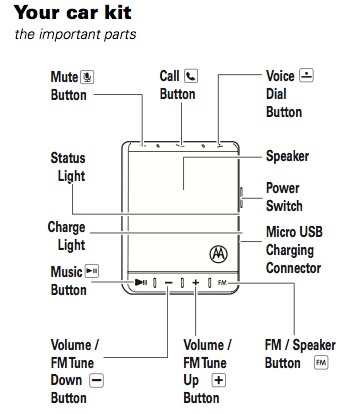 If you’re going to buy this device to change your life, think twice, and definitely demand to try out a model in-store. If you’re unable to do voice commands with your normal speaking voice, you’ll be in for a lot more trouble than the Roadster is worth. If you realize that any device like this is something you’ve got to work with for a while to get the hang of and find the true value in, go for it.

You can access the user guide for this device over at Motorola if you’d like to see the amount of work that’ll be going into it to make it work with everything you want it to work with. The device will run you $99.99 if you purchase it from the Motorola store right this second. Is that more than you make in a day? Consider that. Is it a drop in the bucket for you? Buy it to try it. It definitely is fun to use.