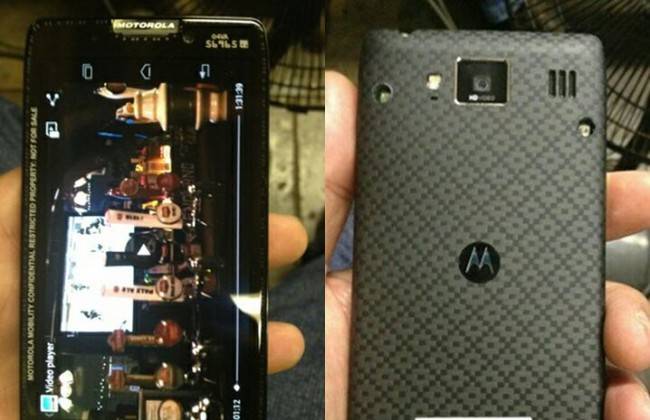 Motorola’s next big flagship phone is rumored to be the RAZR HD. We’ve seen bits and pieces about it from the FCC but today we have the real deal. A lucky XDA user managed to post multiple pictures of Motorola’s latest phone for us all to enjoy. I sure hope that isn’t the final design though, as it has one ugly back.

According to the leaks over at XDA this is an international version of the RAZR HD, so we can’t confirm this will be exactly what Motorola releases on Verizon later this year. The phone appears to be running on Vodafone, has Android 4.0.4 Ice Cream Sandwich, and seems to be on a build from Motorola that is over a month old. Could this be a final shipping device roaming around?

Just like the Motorola Atrix HD the new RAZR HD will feature a 1280 x 720p HD display and use on-screen navigation buttons rather than be capacitive like the past. The Atrix HD is a great phone and you can see more from our full review below. The RAZR HD seems very similar in many ways, but we won’t know until we get a better look at it.

Previous rumors suggested a 13 megapixel rear camera but today has cleared that up. It will indeed come with an 8 megapixel camera with flash instead. Motorola recently announced they’ll be unlocking all their devices bootloaders, starting with the PHOTON Q. Hopefully the new RAZR HD will have the same fate. Most likely we can expect the above device to land on Verizon as the Motorola DROID RAZR HD later this fall. Who likes what they see?