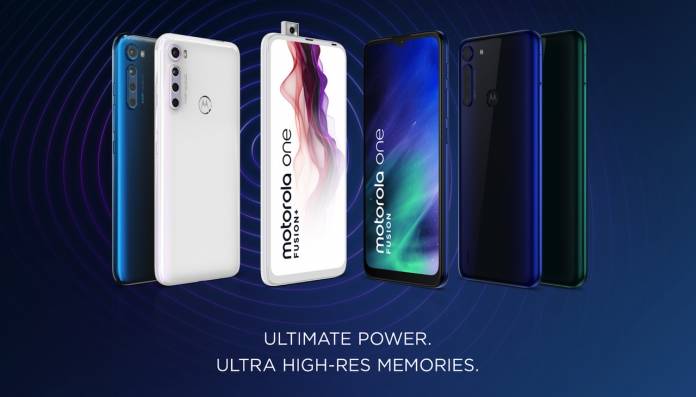 Today, we’re learning about the Motorola One Fusion. It’s the mid-range variant with watered-down specs from the One Fusion+. Obviously, it’s more affordable.

The major difference between the two, aside from the price, is the camera performance. Imaging specs only include a camera placed under a notch instead of a pop-up camera. It comes with a large 6.5-inch Max Vision display that only shows HD+ resolution.

Other specs of the Motorola One Fusion are as follows: 64GB onboard storage, 4GB of RAM, Qualcomm Snapdragon 710 processor, rear fingerprint scanner, and the same 5000mAh battery. The main camera system is comprised of 48MP primary + 118-angle ultra-wide shooter + 5x macro camera + a depth sensor.

This mid-range smartphone from Motorola costs lower than the 300 EUR price of the Motorola One Fusion+. Availability starts in Latin America and then Saudi Arabia. The UAE will get the device in August. No information if and when the Motorola One Fusion will also roll out in other markets but we’re expecting it to be sold in the United States.