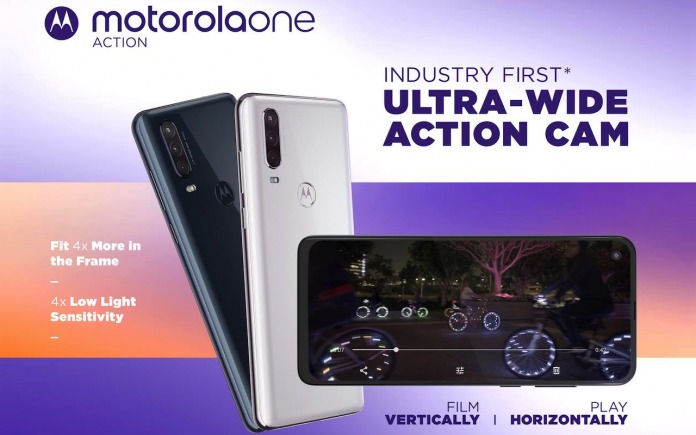 After announcing the Moto Z2 Force is now compatible with the 5G Moto Mod, Lenovo-Motorola has officially launched the Motorola One Action. The phone has been a favorite subject since May when we first mentioned it could be a rugged mid-ranger. Specs have been sighted earlier, triple rear shooters included. We’ve also seen an image render and soon it was sighted again with a 21:9 screen and an Exynos 9609 processor. We can’t say this is the notchless and almost bezel-less phone we’ve featured recently because there is an obvious chin.

Motorola often introduces new technologies together with its smartphones. This time, the Motorola One Action is being introduced as the first-ever “ultra-wide action cam” in the market. It’s not just an ultra-wide shooter. Motorola has given emphasis on its being an action camera which means it is ideal for recording action adventures.

This Motorola One Action is another camera-centric phone that lets the consumers capture more memories. What’s unique about this is that you can shoot in landscape even when the device is in portrait orientation with the 117º ultra-wide action video camera. The main rear camera system can capture scenes in wide. The three rear cameras are enough for now to capture everything.

Moto Experiences is also a special feature. Moto Actions that work like features work best with the redesigned One Button Nav. When it comes to pricing, the Motorola One Action is €259 in Europe, Brazil, and Mexico (about $287 in the US). It’s already available in the said regions while it will be out next month in more countries in Europe, Latin America, and the Asia Pacific. US and Canada will get it later in October but already unlocked.