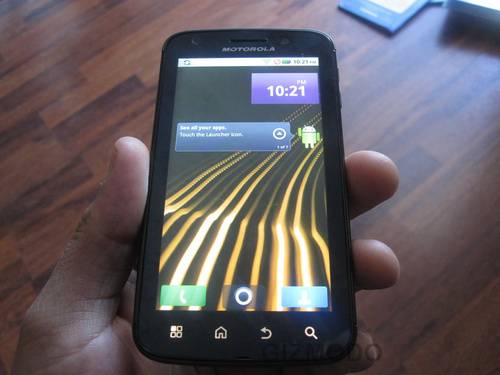 One of the must-have devices of the upcoming new year, is the Motorola Olympus. While it may look like a larger version of the previously released Motorola Defy, there’s a few changes included with this new device to make it one device that any Android fan would want to get their hands on. Namely, that display that’s supposed to be larger than 3.7-inches, and the processor under the hood. For one lucky individual, who just happened to be in the right flea market at the right time, it looks like they get to enjoy the device well before any other consumer.

According to the source, who sent the images into Gizmodo, he picked up the device from the market “not knowing it would turn on.” When he tried pushing the volume down button, along with the power button, the purchaser was able to access a developer’s menu. One of the options therein, was the ability to bypass the activation screen, which subsequently let him access the device proper, and snoop around.

We can tell that the device features an HDMI port, and it will also have a microUSB port for when you need to sync data, or charge the device. As for that Tegra 2 processor, there’s still no absolute confirmation that the Olympus features this, but the rumors haven’t died down regarding this feature. The display, as we mentioned above, is supposed to be larger than the Defy’s, which means it will measure in more than 3.7-inches. One thing to notice, though, is that the Olympus is obviously promoting full Motoblur connectivity here, so that will either be a draw for some, or a negative to others.