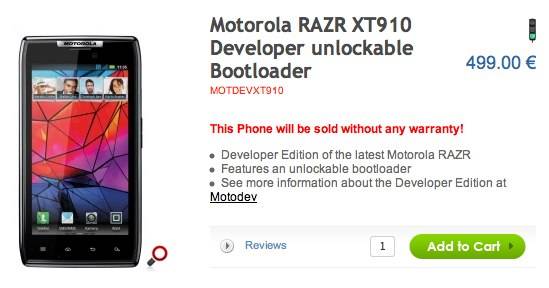 Motorola has announced a new variant of the RAZR, the RAZR XT910 Developer Edition, targeting coders with its unlockable bootloader. Currently up for pre-order in Europe, with a US version in the pipeline, the new RAZR is intended for developers looking to create and test Android apps on a recent handset.

Motorola’s regular range of consumer handsets come locked-down, a precaution by the company and its carrier partners to avoid modifications and tweaks to the core user-experience. However, Motorola says, the new Developer device “allows us to continue meeting our carrier and regulatory obligations, but also meets the needs being expressed by our developer community.”

There are some compromises involved if you’re interested in the Developer Edition, however. The new RAZR is sold without a warranty, which means if you brick the device during your play you can’t expect much in the way of help from Motorola to get it working again. There are plenty of warnings – along with other information on unlocking and modifying the phone – at Motorola’s developer site.

The European RAZR Developer Edition is up for pre-order now, priced at €499 ($657), though there’s no indication of when it will ship. The US version will go on sale “in the coming months” Motorola claims.