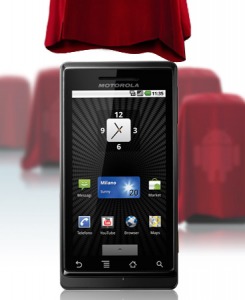 Cellular South has officially announced that the Milestone will be available soon. A little over a month ago they placed a promotion on their site with an unknown Android handset under a veil. Now that veil has been lifted to reveal the Motorola Milestone.

The Milestone has a 3.7-inch display, 8GB memory card and a 5 megapixel camera with dual-LED flash. It comes preloaded with Android 2.1 and all of the Google Experience apps. There’s no word yet on if and when Android 2.2 will be pushed to the phone.

If you don’t know, the Milestone is the Droid with GSM instead of being CDMA. The press release didn’t give a specific release date or pricing information but it is coming. Cellular South also stated that this is the first of many Android handsets for them so stay tuned, there might be a few more surprises for you Cellular South customers.