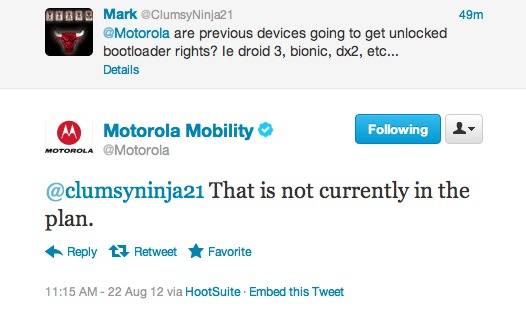 Sadly I’m not really surprised with the news that just landed in our tip box this afternoon. Motorola has just released an informal statement over on Twitter regarding the bootloader unlock process they’ve recently released. Today they’ve confirmed that older devices will not get their bootloaders unlocked.

The folks from Droid-Life spotted a conversation by Motorola employees going on over at Twitter and sadly we just learned what we already were all thinking. If you want to unlock the bootloader on that DROID Bionic, or DROID X2 it looks like that won’t be officially happening any time soon — if at all.

Motorola finally announced and released their bootloader unlock tool late last week, just like ASUS and HTC did, but the bad news continues for Motorola. HTC slowly but surely added most of their 2011 lineup including the old HTC ThunderBolt to the list, and unlocked all the bootloaders. Apparently Motorola doesn’t feel the same way and won’t be taking that route.

They’ve just confirmed that older devices won’t be unlocked and that unlocking older devices “is not currently in the plan.” Pretty sure you guys can all thank Verizon for that one — just a thought. They also don’t mention the DROID RAZR, but hopefully that gets the unlock treatment as it’s one of their most popular devices to date. We’ve seen a public outcry for these things in the past cause HTC to cave on decisions, but I have a feeling we won’t be so lucky with Motorola.