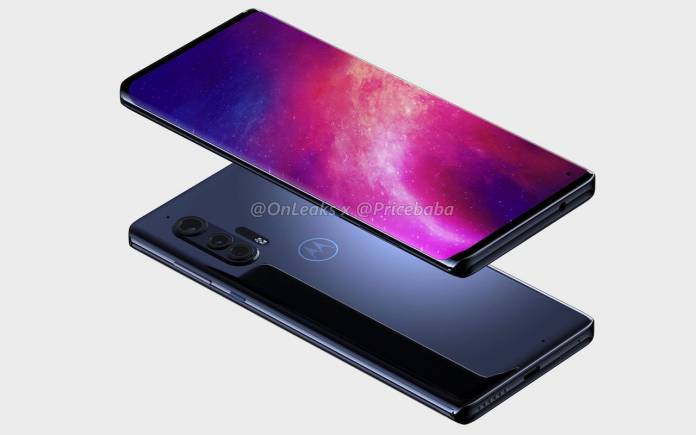 Motorola earlier launched the Moto 8 mid-range phone. It’s been only a few days since the Moto G Stylus and Moto G Power were offered online. There is still the Motorola RAZR to market but that one is a special case. The next phone to be revealed is the Motorola Edge+. There is no special announcement yet but here are the latest and exclusive image renders and a 360-degree video. This is believed to be the next flagship phone from the company now owned by Lenovo. It will follow the old Moto Z3 from 2018.

The Motorola Edge+ has been rendered by Pricebaba in partnership with Onleaks. Looking at the images, we see a curved waterfall display and a small punch-hole cutout for the selfie shooter. The screen size may be anything between 6.5- and 6.8-inches. Dimensions are around 161.1 x 71.3 x 9.5mm and up to 11.5mm for the camera bump.

The Moto Edge+ is also said to come with an on-screen fingerprint scanner and a triple rear camera system placed on the top left corner in a vertical orientation. We also see a dual-LED flash unit plus a pair of noise-canceling mics. A 3.5mm audio is placed on the top. At the bottom edge are the USB Type-C port, speaker grill, SIM card tray, and a noise-canceling mic.

We can also expect a 90Hz high refresh rate, FHD+ resolution, Snapdragon 865 processor, and 8GB or 12GB of RAM. A large 5170mAh battery will be ready. The phone is also said to be Motorola’s first-ever 5G phone offering.

Verizon is also rumored to release the Motorola Edge+ in the United States. A global launch will follow after. No information on exact availability and pricing yet but we’ll let you know soon.