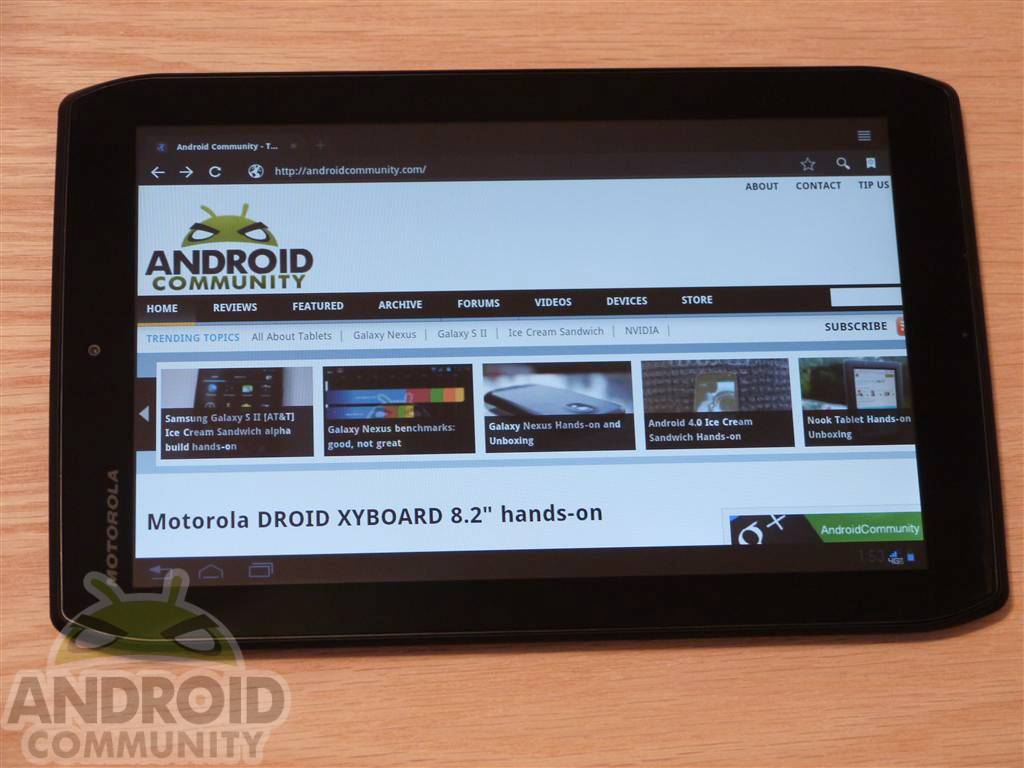 Earlier this year Motorola’s first tablet the XOOM launched as the first Honeycomb tablet and had plenty of promise. Sadly the hefty size and bloated Verizon 3G data pricing didn’t help its cause. We now have the next-gen Xoom happily named the DROID XYBOARD tablets to see what they learned from their first attempt at a tablet. The XYBOARD has been hanging out with our team and a few Galaxy Nexus smartphones this week and below you’ll find our thoughts on this 8.2″ Honeycomb device.

We have an unboxing video and some hands-on with a few accessories from Motorola below but for now we’ll focus on this portable slate, its goofy name, and the hardware under the hood.

Hardware
The original Xoom was the first Honeycomb tablet and first with a dual-core NVIDIA processor — not counting that awful FroYo powered Viewsonic G-Tablet. The hardware was nice but compared to the iPad it was a bit on the heavy/thicker side and wasn’t the easiest to hold for long periods. The DROID XYBOARDS have completely took a new direction. They are thin, lightweight, and powerful but other than those key points this is still a XOOM if you ask me.

The new XYBOARD 8.2 feels great, has an eye-pleasing matte finish that is surprisingly easy to hold coming in at 216 x 139.8 x 8.99 mm and 390g — although it wont win any beauty contests. Sadly the power button is still on the rear. I hate flipping it over to make sure I hit the right button — or guessing and hitting the volume instead. Sadly this is one thing I’d really like to change but the sleek design didn’t make it extremely easy. 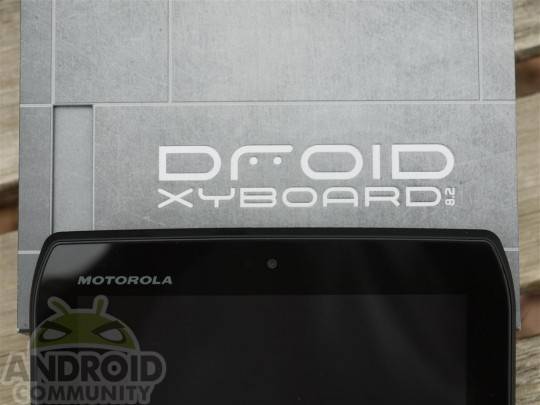 The specs are pretty similar but a few things have changed. Here we have an 8.2″ device with the same 1280 x 800 HD resolution. The processor has been swapped out to a faster dual-core 1.2 GHz SOC with 1GB of RAM, 32GB internal storage, 4G LTE, and a pair of cameras. The display is IPS and is a vast improvement over the first-gen XOOM so that is a plus. We have no SD slot but it does offer micro-USB (for charging) and I’m glad there isn’t a proprietary cable for that. It also sports an infrared port and can be used as a large universal remote when your not streaming content out the micro-HDMI.

Sadly it seems Motorola and Verizon rushed to market with these to meet this holiday sales time and this tablet is right on the edge of two important things. A quad-core processor and Android 4.0 Ice Cream Sandwich. For someone that needs an excellent tablet with 4G connectivity right now though — this is great but its reign wont last long. 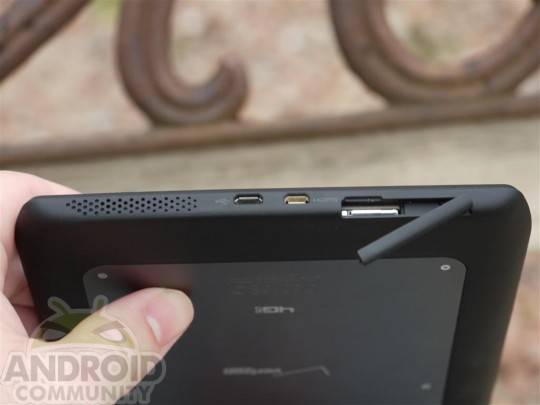 Software
The software is everything we’ve come to expect from Android 3.2 Honeycomb. Most tablets I’ve docked points if they have Gingerbread and while it’s too early to do the same with tablets and Ice Cream Sandwich, I just wish they’d have waited and released with the ice cold treat on board instead. What we do have though, is a larger DROID as Motorola has included their Blur UI changes that are present on all DROID phones. The changes to Honeycomb were extremely light and more to just match their other devices because it’s pretty minimal and performance is still excellent. 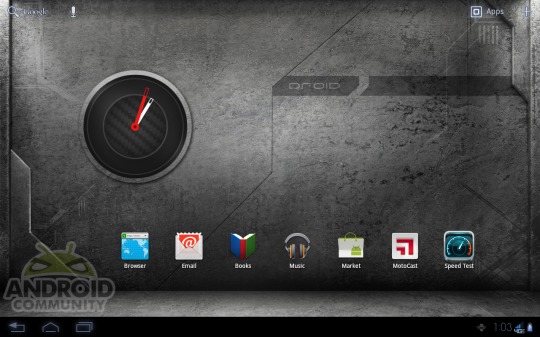 Being a DROID branded device it does have plenty of Verizon bloatware but you should be expecting that so I wont comment further there. We do have some worthwhile apps pre-loaded like Evernote and the awesome Madden 2012 NFL game. Not to mention Blockbuster, Amazon Kindle, and Netflix. Android 3.2 Honeycomb was more stable and smooth here than many in the past — including the original Xoom and the benchmarks below seem to back that up. I found zero slowdown from the changes by Motorola so that shouldn’t concern a potential buyer.

Benchmarks
As usual we like to run a few benchmarks to see how everything is performing and handling its day to day tasks and the XYBOARD 8.2 actually blew other tablets out of the water — not counting that quad-core Prime although we did get a higher Quadrant with this little guy. Rocking a 1.2 GHz dual-core processor and a 1280 x 800 resolution I wasn’t expecting much but I scored over 3100 in Quadrant (more than most tablets) and Vellamo was at the top of the charts. More info is in the full gallery below. 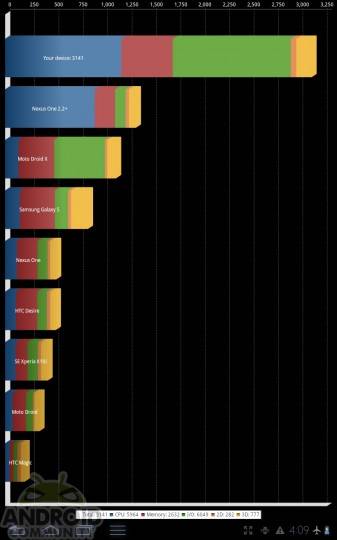 Camera
Motorola’s equipped these slates with a decent 5.0 megapixel camera on the rear with LED flash. Sadly just like many Motorola devices in the past while the UI is neat the shutter speed is extra slow and makes for a difficult time snapping a photo. Once I was able to hold still long enough for the awful autofocus and shutter speed I got a few decent shots. I’d rather use my smartphones camera but this will do if absolutely needed. Here’s a sample with more down below. 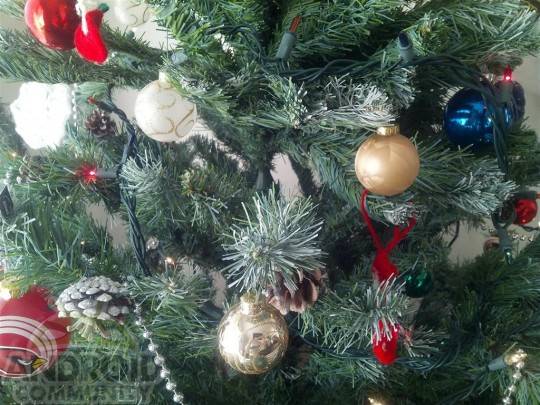 Battery Life
The XYBOARD 8.2″ is powered by a 3,980 mAh battery and is small enough that can be charged by a simple micro-USB cable. Charging from a computer or phone charger was extremely slow but the included charger did the job well. Using the tablet for some heavy Madden 2012 gaming followed by some benchmarks I found the need for a wall socket after around 6 hours which was pretty decent for the battery size. Other larger tablets pack a bigger punch so this seemed about average to me. Standby battery was excellent however — and using it off and on briefly without and major gaming sessions it’s been on for over 3 days with a single charge.

Accessories
Verizon and Motorola are offering a smart cover similar to the iPad 2 but the design was quite terrible and I couldn’t get it to work well enough to even warrant a photo. They do however offer an HD Dock for $59.99 from Verizon.com that works quite well and is universal to other Motorola devices — shown in the video sample below along with the wireless keyboard.

Wrap-Up & Value
Now value is determined more by the user and his/her needs. If you’d like a great WiFi tablet this is not for you. If you’re needing a 3G/4G capable tablet that also manages to be extremely portable and powerful this would probably be my first choice. With tethering and hotspots I’d rather get a cheaper WiFi model myself but that option isn’t available for everyone. Pricing start at $429.99 for the 16GB 8.2-inch version, all the way up to $729.99 for the 64GB 10.1-inch version — all with new 2-year contracts of course. They may be released as the XOOM 2 later with Wi-Fi only but for now Verizon is your only way into one of these tablets and sadly they are way too expensive.

Yes the new XYBOARD tablets are worthy successors to the original. They have amazing build quality, decent battery life and excellent performance but I can’t help it but want something more for the price. The unique design is nice and they do get a few added points for that. All in all I’ve enjoyed this tablet and been taking it everywhere with me all week but the price and handcuffs that come along with it have me thinking twice about a purchase. Everything you’d like to know about these tablets is available from our timeline, followed by the photo gallery and full specs below. 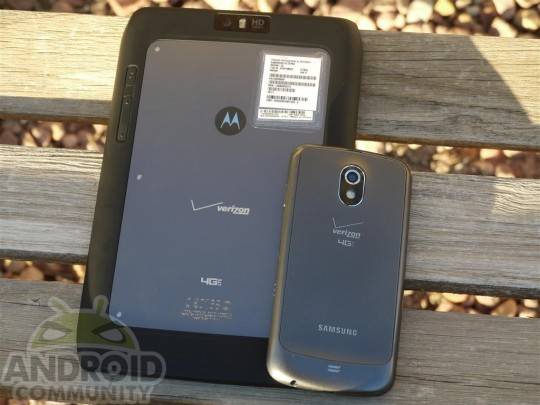