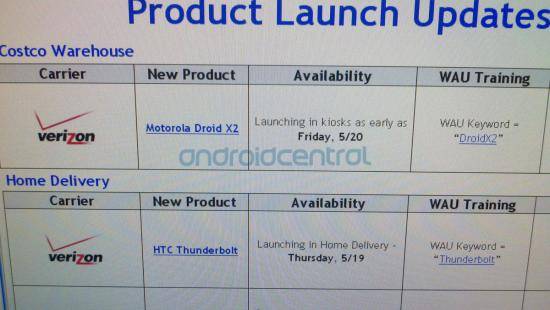 It looks like Costco is getting in on some Droid X2 action also. I am sure you all know plenty about the Droid X, and its bigger brother the X2 coming this week with an improved higher resolution display and blazing fast dual-core CPU to speed things along. We recently posted about it officially heading to Verizon online and stores starting tomorrow and the 26th in store. Costco might beat them to in-store access.

According to the Verizon announcement the Droid X will be available for purchase on Verizon starting tomorrow May 19th, and then in-store on the 26th, but after seeing the photo above Costco has it listed as “launching in kiosks starting as early as May 20th”. I doubt Verizon would let Costco sell them physically in store, before Verizon stores themselves so maybe that is why it mentions “as early as” May 20th, and not actually for sure on Friday.

Either way the Droid X2 will be making it into buyers hands starting early next week, or some lucky buyers online tomorrow might get it Friday if they do overnight shipping. For now we only have the screenshot above to go on, so it is possible they will be “in stores” at Costco starting Friday May 20th but I have a feeling they wont be physically there until the 26th just like at the Verizon stores. Stay tuned as we will update this story once we hear more.

Update: It looks like new information just dropped again, and according to AndroidCentral the Droid X2 has been ready to sell for more than a week now, and most stores probably already have stock. The last information we just received shows an email stating sales “can start” starting Thursday at retail locations. So if your not busy tomorrow, or really want the Droid X2 feel free to check with some Verizon retail stores and hope you get lucky.