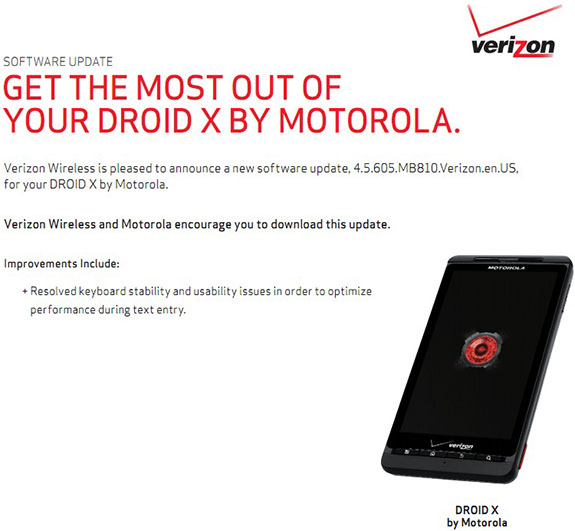 Owners of the Motorola Droid X, have been experiencing some issues with the keyboard causing the device to freeze and reboot. Motorola seems to be rolling out the .605 update which some users have reported fixes the current issues with the keyboard. However the release of the update has not gone as smoothly as some had hoped with other issues coming up from the update.

Overall, the entire update is a sizeable 113MB, all to fix one seemingly minor issue. The only thing Motorola lists on the changelog for the update is that it “resolved keyboard stability and usability issues in order to optimize performance during text entry.” Furthermore, RootzWiki, who had been offering the .605 update for download, has pulled the update, citing that the update made the device more buggy overall.

Whether or not the file that RootzWiki had been hosting is the same file as the update that is being pushed out to the Droid X is yet to be confirmed. But, if you want to pull the update to your phone you can do so directly on your Droid X by tapping the menu key, settings, about phone, system updates, and download. Do so at your own risk however as downgrading your firmware after installing the update may not be as simple if you ever decide that you want to go back.