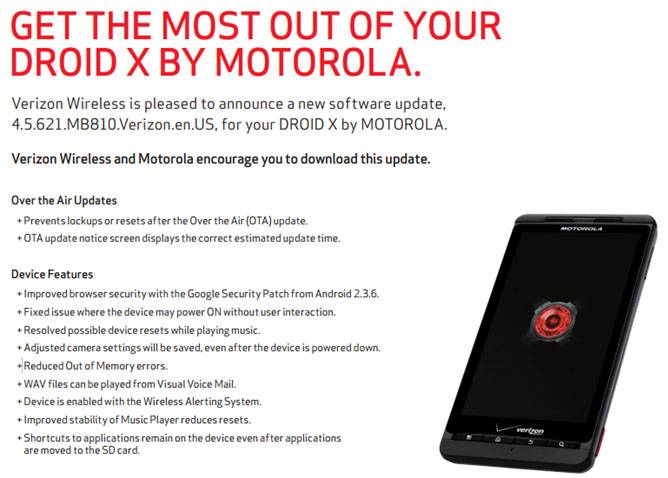 It’s been many moons since the original Motorola DROID X (released way back in the summer of 2010) got some of the old OTA love. Today Verizon announced a long overdue software update that fixes a host of bugs in the latest official Gingerbread build. DX users can get the update now via the manual method, or just wait for the update message to appear on your phone. And if you’re still running stock, you’ll definitely want the update.

Just a few of the new enhancements included in the 4.5.621.MB810 build include: better browser security, saving camera settings, better memory handling, WAV support in Visual Voice Mail, better Apps to SD support, and bugfixes for the update process itself, 3G hotspot, music app, and power management. If you’re a big fan of Motorola’s docks (guilty!) you’ll be happy to know that the DX now shuts off its button lights, making it a much more functional night table alarm clock.

Unfortunately the DROID X is still saddled with a locked bootloader thanks to Verizon’s policies, so if you want stable software, Gingerbread is about as far as you can go. There are recoveries and ROMs available, but they all load off of official kernels, so what Ice Cream Sandwich ROMs are out there are largely unstable. That said, there’s some pretty good options in the Gingerbread realm, including official CyanogenMod 7 and a host of independents like Liberty. For everybody else, the long development cycle is (mostly) worth the wait.