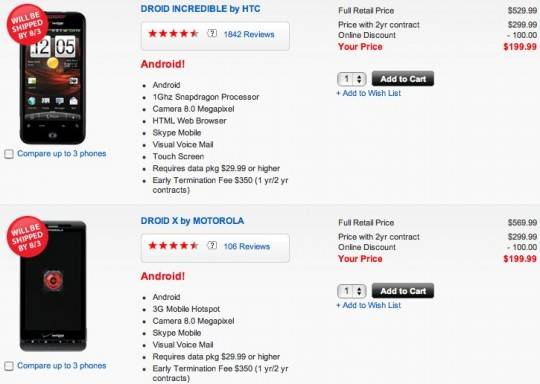 One of the problems with having one of the most sought-after smartphones in the market, is the fact that the manufacturers tend to have a lot of problems keeping them in stock. It has actually been a pretty big problem since the beginning of the Summer, at least, and there doesn’t look like there’s a solution in the near future. While the Incredible’s been out of “immediate satisfaction” categories since pretty much its inception into the market, there was a few people out there hoping that the Droid X wouldn’t fall into the same territory. That’s not happening, though.

Both the Droid Incredible and the Droid X, from HTC and Motorola respectively, have now been delayed until August 3rd. For the Incredible, this is pretty much standard — but the Droid X has only been pushed back once, and hopefully it will stay that way. Through massive sales out of the gate, it looks like the Droid X will be segregated to that “Do you have one?” category, rather than “Hey, I’ve got one of those, too.” Probably good for those of us who do have the Droid X, though — at least we have something to show off for a little while longer, right?