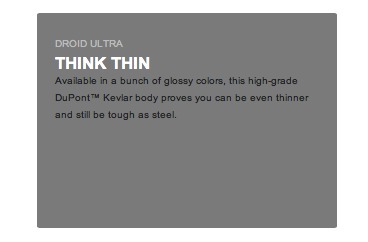 It looks like Motorola has revealed some details on an upcoming smartphone. The device is called the DROID Ultra and the details are coming by way of Motorola’s own website. That said, while the name and some details have been mentioned, there is still plenty of mystery remaining.

The DROID in the name implies the handset will be heading to Verizon Wireless and otherwise, we also know it will be sporting a “high-grade DuPont Kevlar body.” And taking the exterior one step further, there was also mention of the DROID Ultra arriving in “a bunch of glossy colors.”

There aren’t any images of the handset on the landing page, however it looks like a big highlight of the Ultra will be thickness. Well, in this case the thinness may be a more accurate description. Otherwise, the little bit we have seen from Motorola goes back to the DuPont Kevlar body which should say something about the strength and durability of the handset.

The other part worth mentioning about this landing page are the specs. Yes, there are some listed if you scroll down a bit, but they appear to be nothing more than a placeholder. Or actually, a copy of the specs from another Motorola RAZR handset. The specs match the Droid RAZR M. Basically, it looks like Motorola used the RAZR M setup as a template to get things started.

The Ultra sounds interesting enough at this point, but it is also worth mentioning the use of Kevlar is nothing new. In fact, we saw Motorola use some kevlar material on the RAZR M (on the back panel) and on the RAZR HD which had a bit more as compared to the RAZR M.