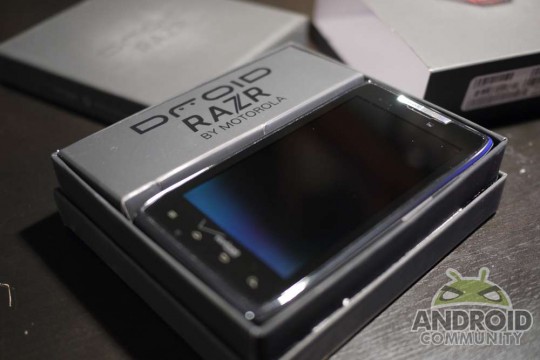 An next official build of the Motorola DROID RAZR has leaked, and it is available now for download. Of course, it hasn’t been released by Motorola officially. Now at Android 2.3.5 (Gingerbread), your device will be upgraded to 2.3.6. There are a few significant changes in this build, and an LTE radio update will probably be the reason most update now opposed to waiting for a push.

Also updated will be Motorola’s very own user interface, Motoblur. It will add a few applications such as Moto Car Finder and a few other enhancements you early adopters will have to tell us about. To go through with the update, download this file and place it on your external SD card. Placing it on the external card is EXTREMELY important.

After the file is placed in the proper spot, go ahead and turn off your RAZR. Press both volume keys in and then the power button. Once in recovery, press both volume keys at the same time again. Look for the file you just downloaded on the external card, and select to install it. Select to “Reboot System Now” after the installation, and your RAZR should be running 2.3.6. For those of you brave enough to give this a try, let us know if this worked for you.

Do note: This will remove root.