Verizon’s long-haul update to the Motorola DROID RAZR is available in stores today: the DROID RAZR MAXX. If you’ve seen (or unfortunately, own) the DROID RAZR, there’s only one major difference: a slightly larger body that accommodates a huge 3300mAh battery. Verizon was kind enough to send us a review unit, which we promptly unboxed for your viewing pleasure and consideration. Same song, second verse:

It’s actually kind of remarkable how little the RAZR MAXX changes things from the original. Obviously, the 8.9mm thickness is a nit more realistic than the shockingly thin RAZR, but it’s still a pretty sleek device – compare this with the original Motorola DROID BIONIC, and the difference is still shocking. The 4.3-inch AMOLED display dominates the front fascia, with a surprisingly large bezel and four standard Android buttons.

Around the back you’ve got the slightly rubbery texture of the DROID RAZR MAXX’s Kevlar backing. There’s still no way to remove the battery, but with a claimed 20+ hour runtime, Verizon hopes you won’t have to. The right side holds the volume up and down buttons next to the power button, with the left side reserved for an access door to the 16GB MicroSD card and LTE SIM card. On top you get a MicroUSB charging port, HDMI port and headphone jack. 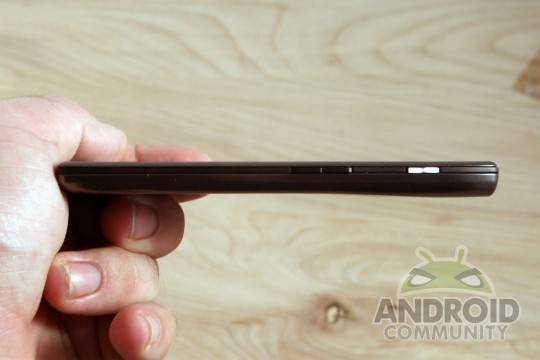 The phone feels just as solid as the RAZR, with one crucial difference: thanks to a little extra heft, it actually feels better in your hand. Where the RAZR would almost chafe because you fingers had to apply extra grip, the MAXX settles into your palm more like an ordinary phone. It’s a small detail, but given the choice between the two I’d take the MAXX for making phone calls. At least that’s my initial conclusion.

Sorry to sound like a broken record, but on the software side of things the DROID RAZR MAXX is identical – nay, indistinguishable – from the DROID RAZR. You still get Motorola’s skinned version of Android 2.3.5, which Moto and Verizon promise to upgrade to Ice Cream Sandwich eventually. Even the model in the “About phone” section still lists the device as the DROID RAZR. Response is fast and snappy, thanks to a dual-core 1.2Ghz processor and a full gigabyte of RAM. And of course, access to Verizon’s 4G LTE network is included. 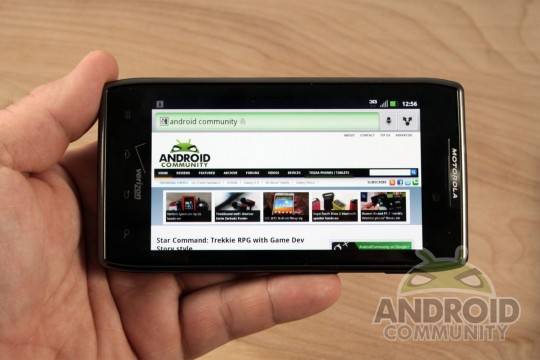 As a phone alone, the $300 DROID RAZR MAXX is a solid contender, thanks mostly to the extended runtime. You can bet we’ll be putting that capacious battery through its paces very soon. The only sour note for the RAZR MAXX is that it came so soon after the DROID RAZR – soon enough that moving the former up or the latter back as far as release date goes could have made early adopters eligible for a return. As it stands, all those who went out to buy the DROID RAZR on day one will have to wait at least two years to buy another phone, which might get on their nerves whenever that battery is running low.

It’s a nice phone to be sure, and for many will be more desirable than its skinny brother. We’ll have a full review up soon. in the meantime, enjoy our unboxing video below: