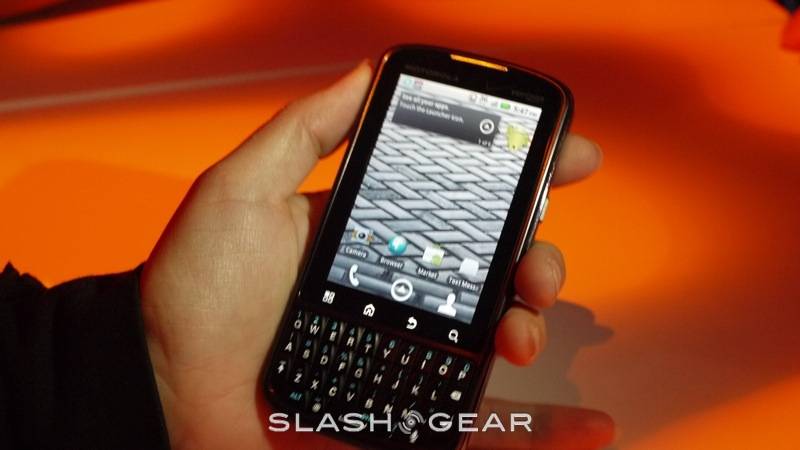 Motorola just announced the Droid Pro, their first candy-bar, “BlackBerry-esque” Android-based device, and now we can say that we’ve managed to get some hands on time with the device. It’s a unique form factor, but we can safely say that it’s one that we’ve been waiting to get our hands on for some time now. The way that Motorola has incorporated the same Blur-style User Interface with the 3.1-inch touchscreen, and the full QWERTY keyboard underneath it, the Droid Pro definitely has the potential of climbing the list of favorite Android devices.

As we messed around with the device, we were happy to see that there wasn’t much lag or stuttering at all. Clearly, the 1GHz processor under the hood was a good decision. But, the main takeaway from the device is its keyboard. It’s very, very good. But, it would have to be, considering the fact it plays front and center on the device, and doesn’t hide at any time. As far as the precise details on the feature set, that looks something like this: a 1GHz OMAP 3620 processor; 512MB of memory, and 2 GB of on board storage. You’ll find 802.11n 2.4GHz WiFi, Bluetooth 2.1, and the device supports tri-band UMTS. There’s a hardware key along the side of the device that, when you push it the first time, it will ask you what you want it to do from that point on. Customization done in a classy way.

Check out our hands on video below, as well as the image gallery.