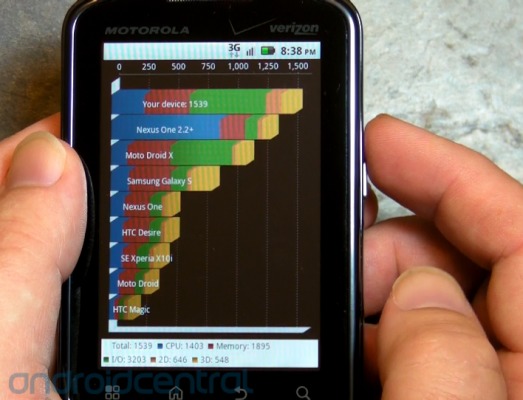 The recently released Motorola Droid Pro has just gotten through with its benchmark tests, and the results are in. I must say, the results are pretty impressive. The Droid pro runs on a 1GHz processor on a 3.1-inch touchscreen with 320×480 resolution.

The Motorola Droid Pro scored a 1539, which is higher than the Droid X and the Nexus One on Froyo. Keep in mind that these benchmarks don’t mean everything when it comes to a phone’s performance, there are alot of other things to take into account as well. As you can see in the video below, the guys at Android Central run some games on it pretty easily. One of the games, Need for Speed: Shift, is included in the game and is said to work well, and don’t worry Angry Birds works perfectly fine as well(sigh of relief). Check out our hands-on video over at Slashgear and keep an eye out for a review of the device coming soon. Full video of benchmarks is available below.