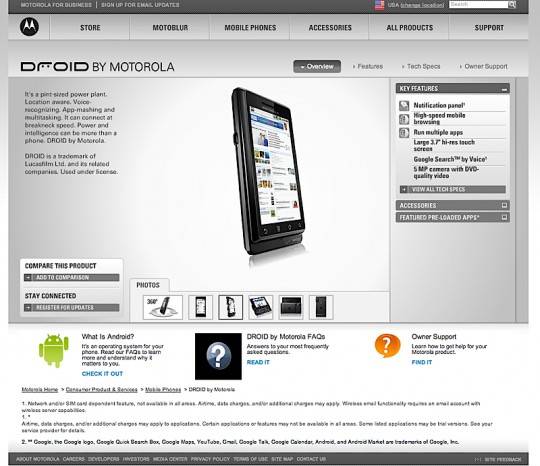 You have probably seen and heard of that cool Motorola Droid that is taking aim directly at the iPhone. The new Droid has been seen in dark teaser videos and other places before. Today someone over at Motorola hit the go button and posted the official Droid site early.

The official page has been pulled since then, but not before our sister site SlashGear grabbed screen shots and specs you’re your perusal. The phone will have a 3.7-inch touchscreen, 5MP camera, and a 550MHz CPU among other niceties. That camera has a 4x digital zoom and dual-LED flash.

The battery is a 1400mAh unit good for up to 385 minutes of talk and 270 hours on standby. The device connects to EVDO Rev A 3G networks and features Wi-Fi, Bluetooth, GPS, and a micro USB port. Storage is to a 16GB microSD card and the handset weighs only 6-ounces. No pricing or official launch date is known at this point.