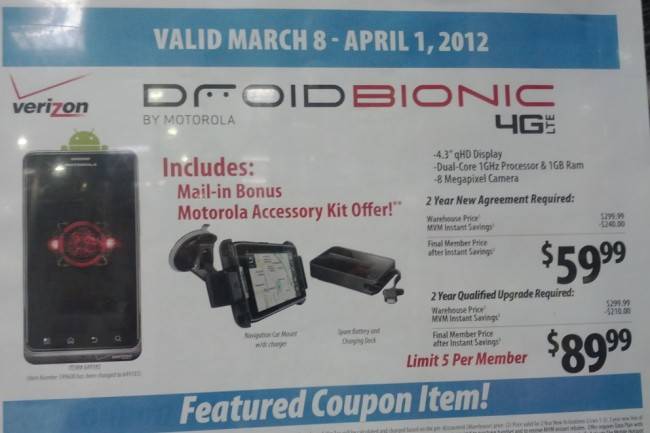 After talking about the DROID Bionic almost daily for what seemed like months its time has sort of faded away. Other than a few updates and bug fixes it hasn’t been in the news much but this deal from Costco is worth the shout out. If you don’t need the biggest or best smartphone out and want a top notch 4G LTE smartphone this deal is one to see.

Costco is offering the Motorola DROID Bionic along with the official car dock, and an extra battery (with charger) all for only $59 and a new contract. Yup you get all three items for one low price — making this one of the better deals we’ve seen in a while. For those eligible for an upgrade and not a new customer it will still only cost you $89 to get in on this awesome deal.

We reviewed the Bionic back in September when it was first released (link below) and was extremely impressive and has a dual-core processor and Verizon 4G LTE. Since then phones like the RAZR have been released that are thinner, get better battery life, and have higher resolution screens like the HTC Rezound. For those that want an awesome phone but don’t want to spend $199 or more head down to Costco and give this deal a go. It’s worth noting they have plenty of deals, just not everything comes with free accessories. The HTC Sensation is only $49. Enjoy!