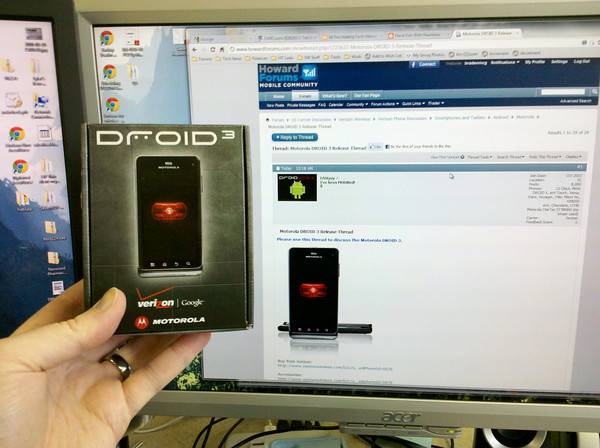 It appears that a few that ordered the Droid 3 and chose 1 day shipping are already receiving the dual-core packing smartphone on their doorsteps. A few users over at HowardForums are now starting to take pictures and play with the new phone and they’ve posted some pictures and impressions for those interested.

I only read a few pages deep but from initial thoughts they seem to love it but mention it is a bit heavier than the Droid 2. That is to be expected when it has a larger screen, larger battery, and a few improvements like the front facing camera and dual-core CPU. He has some comments on the Verizon handset if you’d like to check it out.

The Motorola Droid 3 has been in the news a lot the past few days but Verizon never made any sort of announcement until it was already online and apparently shipping to some. This makes us wonder if even Verizon doesn’t consider this phone a big deal. They had commercials and everything for the Thunderbolt and Droid Charge.

The lucky member at Howard Forums that received the phone early mentions that it has 512mb RAM and scored 2250 in Quadrant out of the box. Not bad compared to some of the recent Tegra 2 phones and the Sensation 4G scores around 2200 out of the box for me. Head to the source for more pictures and information.