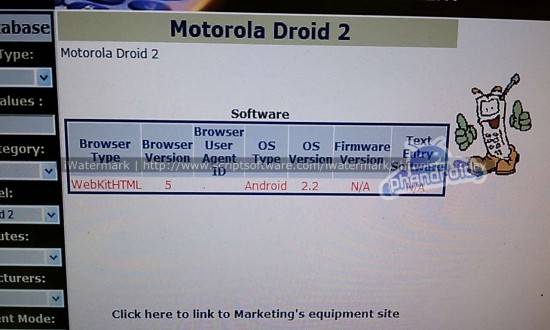 Okay, today’s getting ridiculous. Apparently now that the Droid X is out, the Droid 2 is trying to make up for some lost time in the spotlight. So, right on the heels of seeing a freshly leaked image of the Droid 2 running Android 2.2 in its Settings screen, we get this spy-shot of an internal Verizon system. What’s it say? Well, you guessed it: The Droid 2 will launch with Android 2.2.

Are we surprised by this? No, not at all. Like we’ve said in the past, we imagine that if the Droid 2 is launching anywhere near the end of August (between August 12th and August 23rd are the tentative dates at this point), then it makes perfect sense. The Droid X is scheduled to see the update around the same time, and if they both run the same “skin,” then seeing one launch with the update while the other one gets it OTA style, well, that just makes sense.

It’s good to see the Droid 2 launch with Android 2.2. That means it’s running in the family, more or less, to see major Operating System upgrades launching on high profile devices. Of course, whether or not you think the Droid 2 is actually a high profile device is purely up to you, but with that 1GHz processor under the hood, and a revamped keyboard to make it something like “great” compared to the original’s, we’d imagine many people would think the upgrade is perfectly suited for “high profile.”