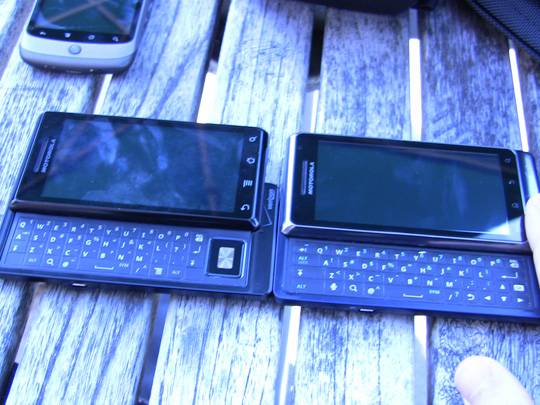 Motorola’s DROID 2 smartphone, the successor to the popular DROID, has shown up in the wild again, this time for a hands-on preview.  Android and Me acquired a DROID 2 and promptly ran some benchmarks on its 1GHz Texas Instruments OMAP3630 processor; that, and its doubled memory from the original DROID, helped it score almost twice as much in GPU tests.

Meanwhile CPU testing showed the new DROID 2 to be the best performing Android 2.1 handset to-date, and since Android 2.2 – which will likely be pushed out as an update shortly after the DROID 2 reaches shelves – boosts performance even more, we could be looking at the fastest Google phone so far.  Of course, also waiting in the wings is the DROID X, basically the same internal hardware but a larger display, better camera and HDMI output.  We’re hoping to see Verizon’s new line at their event this coming Wednesday.