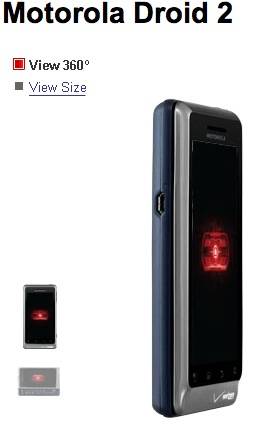 Verizon’s Motorola DROID 2 looks to be imminent, with the new QWERTY smartphone showing up in the carrier’s 360-degree viewer.  The viewer update follows on from the handset being spotted in a Verizon InfoManager page, complete with full specifications, and devices already showing up in Best Buy stores.

Best Buy have tipped the pricing, too, with the DROID 2 expected to come in at $199.99 with a new, two-year agreement.  Verizon are expected to officially announce the DROID 2 on August 12th.