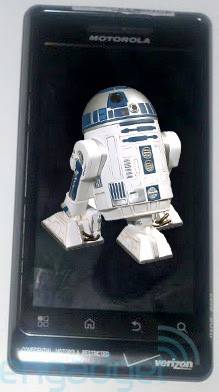 Well, it’s one of those days, apparently. Despite the fact we just heard yesterday that the Droid 2 would probably launch on August 23rd, here’s your first contradictory statement about the matter at hand. According to a trusted source of Engadget’s, it sounds like the Droid 2 is actually going to have a soft launch on August 12th. Why a soft launch? Well, that’s where that August 23rd part comes in, strangely enough.

According to the source, the device will indeed hit store shelves on the 12th, but the heavy marketing for the new device won’t actually kick off until August 23rd. Strange, especially considering the advertising muscle behind the DROID line-up of devices, but obviously they’ve got some kind of plan. And hopefully Verizon loves it as much as another person when a plan comes together.

Now, that R2-D2 part. Apparently, there’s going to be a sorts of “special edition” handset, where there’s going to be a white R2-D2 on the back of the Droid 2. Yes. On the back of the Droid 2, there will be a representation of R2-D2 from Star Wars. But, it also makes perfect sense, considering that the DROID name is actually a registered trademark of Lucasfilms, so why not actually get into the graphic side of it, too? Engadget doesn’t know if the special edition variation will launch hand-in-hand with the “standard” handset. What would you go for? A no R2-D2 version, or one that’s sporting the little droid?