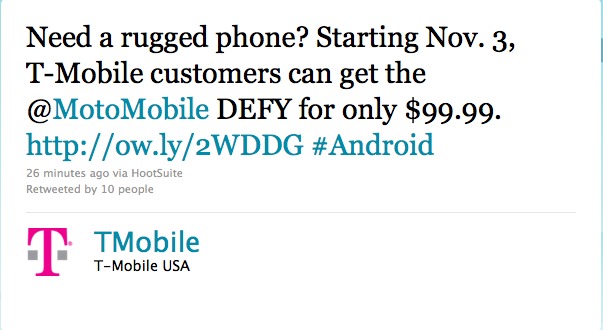 The Motorola DEFY is popping up on wireless carriers all over the globe, and now it looks like T-Mobile here in the U.S. is going to feel the love soon. Just announced by T-Mobile via the company’s Twitter account, one of Motorola’s latest Android-based handsets will be landing on the carrier in the coming weeks.

The DEFY features Motoblur, and it’s designed to survive the rigors of life: it’s dust proof, water resistant, and Motorola says that the display is super scratch resistant. As far as features go, the smartphone features a 3.7-inch capacitive touchscreen display, and you’ll find a 5MP camera on the back of the handset, too. CrystalTalk PLUS DSP technology is also on board, which is utilized to great effect thanks to the pair of microphones Motorola included.

T-Mobile will launch the DEFY on November 3rd, and it will only cost you $99.99.