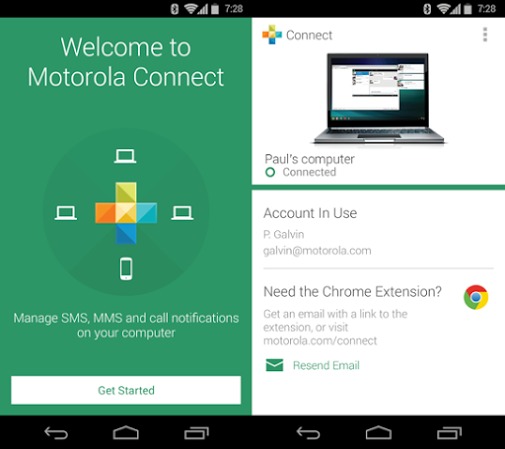 You would think that the more high-end and more expensive our gadgets get, people would be more careful in where you use it and place it. But apparently, incidents of misplaced (and even stolen) gadgets are really on the rise, no matter how careful we think we are. The newest update from Motorola Connect will help smartphone owners a bit in this department, at least in terms of gadgets that you’ve misplaced around the house and office.

Motorola Connect now has a “ring my phone” feature, which will allow you to ring your Motorola phone from your desktop for those times when you’ve forgotten where you actually left your phone, but of course it should be within hearing distance from your computer or laptop. Aside from that, the app is sporting a new user interface, as well as a totally new feel and it is now more conveniently located in your apps tray, instead of just being a chrome extension. However, you would still need the extension if you want to access your messages and calls from your Chrome browser.

However, this ring my phone feature isn’t totally unique to Motorola Connect, as it’s already present in the Android Device Manager, which will work with any Android device. All you have to do is enable this feature in the Android settings, instead of it being an app. But if you’d like something special just for your Motorola phone, then Connect is the app you should use.

Just a few months ago in its last update in May, Connect tried to get new users onboard by adding group messaging and MMS messaging features, It was an enhancement on the ability to read and respond to message on your computer, something that was already useful enough for loyal consumers. Motorola Connect is available for download at the Google Play Store and at the Chrome Web Store for the Chrome Extension.