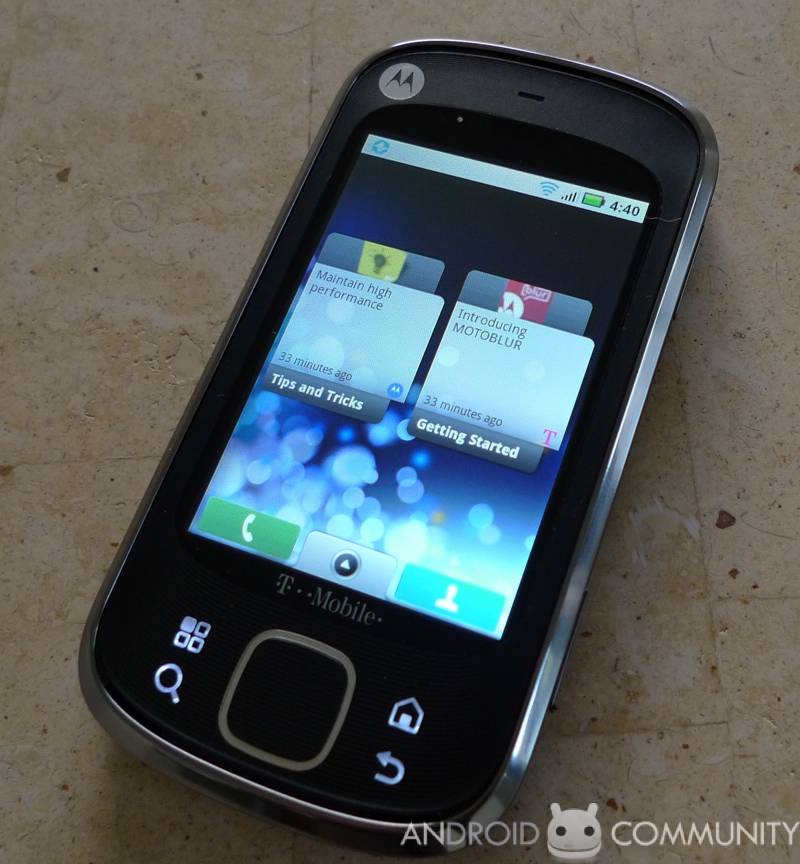 It’s feeling a little like deja-vu here at Android Community, with another Android device from Motorola in to review. Hot on the heels of the Motorola DEVOUR and Motorola BACKFLIP comes T-Mobile’s latest Android smartphone, the Motorola CLIQ XT. As the name suggests, Motorola are positioning the CLIQ XT as a derivative of the original CLIQ (launched back in November 2009) but eschewing the QWERTY keyboard in favor of a newly slim line touch screen-only form factor. Question is, have Motorola done enough to update the rest of the smartphone? Check out the full Android Community review after the cut.

We weren’t joking about the deja-vu; the CLIQ XT (which will be sold as the Motorola QUENCH outside the US) has the same 3.1-inch HVGA 320 x 480 capacitive touchscreen as the DEVOUR and BACKFLIP, together with the latter’s 5-megapixel autofocus camera. There’s 3G – though here it’s support for T-Mobile USA’s 3G network, rather than Verizon or AT&T – along with WiFi b/g and Bluetooth 2.0. It also gets Motorola’s MOTOBLUR social networking system, which pulls in updates from Facebook, Twitter, MySpace and other services, links them with contacts on your handset, and allows you to post updates to one or all of the networks from homescreen widgets.

Unfortunately, it’s MOTOBLUR that’s likely to blame for the CLIQ XT’s aged version of Android. With devices like the Google Nexus One and the HTC Legend – which we reviewed earlier this week – delivering Android 2.1, to launch yet another device with Android 1.5 seems increasingly unforgivable. Motorola say they’re working on an updated version of MOTOBLUR which will be compatible with 2.1, but there’s no public timescale as to its release; similarly, there’s no telling when – or if – further updates to coincide with newer versions of Android might arrive. To be fair, this is something HTC users have faced with HTC Sense, but it’s a concerning fragmentation trend in Android right now.

Even taking into account the limitations of Android 1.5, the CLIQ XT isn’t exactly a speed demon. Unchanged from the original CLIQ is the 528MHz Qualcomm MSM7201A chipset, something even Motorola themselves have abandoned in other recent devices. It adds up to an occasionally sluggish user experience, particularly when navigating between data-heavy apps (such as MOTOBLUR) or using the onscreen keyboard; given there’s no hardware QWERTY any more, that’s doubly frustrating.

Perhaps to assuage such annoyances, T-Mobile and Motorola have partnered with Swype to preload the company’s predictive keyboard technology onto the CLIQ XT. Rather than demanding you hunt-and-peck across the ‘board, Swype allows you to drag your finger from letter to letter, guessing at the word you were aiming for when you lift that finger from the display. We’ve already been using Swype on the Nexus One, and it works very well, certainly if speed is your number one priority. After some practice it’s possible to far outpace a regular on-screen keyboard, especially once you realize the dictionary is still capable of picking out the correct word even if your finger-accuracy isn’t 100-percent.

Non-dictionary words can be entered – and are subsequently stored – by tapping them in as usual, though we prefer the layout of other Android keyboards such as HTC’s to Swype’s. It’s also more successful with longer words; where we had ongoing problems was with shorter terms, those with apostrophes – such as “don’t” – and confusion between single and double letters in words. Meanwhile the trackpad underneath the touchscreen works as well as that on the back of the BACKFLIP, but we still found ourselves using the touchscreen more often than not.

Other changes Motorola have made include adding in pinch-zooming and Flash Lite in the browser, though their processor choice means the CLIQ XT is unlikely to see an update to full Flash. Best of all, though, is the work they’ve done on the Android media player. In its native form it’s an unloveable thing, but after Motorola have had their way there’s automatic lyric and album art downloads from Tunewiki and Internet radio streaming, along with an FM radio and YouTube support. It addresses one of the core shortcomings of Android in its present form, and lays down a challenge to Google themselves for the next release of the platform.

The 5-megapixel camera may tick all the spec sheet boxes, but performance is underwhelming. Autofocus is slow to lock, and more often than not images themselves are blurred or poorly exposed. Maximum video capture is 352 x 288 24fps, which falls short of what other recent Android handsets can manage. Meanwhile the HVGA display and the early version of the OS means there are numerous apps in the Android Market that won’t run on the CLIQ XT, though you do get the usual bevy of preloaded Google titles such as Gmail and Google Maps. Since there’s no Google Maps Navigation beta for Android 1.5 (only 1.6 and higher) if you want turn-by-turn directions then Motorola will point you in the direction of T-Mobile’s TeleNav partnership, which charges $2.99 per month (versus Google’s free alternative).

Motorola are claiming up to 6hrs talktime or 325hrs standby on a full charge, though with MOTOBLUR regularly pulling in updates you’re looking at a nightly top-up if you want to make it through the day. Shutting off the social networking features would obviously prolong the CLIQ XT, but given they’re so integral to the overall experience we’re not sure why an owner would do that (rather than, say, picking another Android device). It’s also worth noting that Android 1.5 lacks the in-depth power monitoring tools of later versions.

Given Motorola’s more recent Android phones have been spread across various networks as exclusives, you can’t exactly accuse them of flooding the market. Still, after the excellent DROID we’d like to have seen a little more imagination in their latest handsets, the CLIQ XT included. Contrasted with the HTC Legend – which, admittedly, won’t be arriving in its current European form in the US – the CLIQ XT’s chassis feels overly-plastic and under-designed. The expanse of textured battery cover (of which Motorola provide two color choices in the box) is calling out for a more inspiring treatment, and the hardware feels either underwhelming (like the HVGA resolution or lackluster chipset) or underused (like the 5-megapixel camera).

Of course, the CLIQ XT’s saving grace is likely to be its price, and while T-Mobile are yet to announce official figures we’re expecting the smartphone to come in at around $130 with a new, two-year agreement. That would put it not far short of the $150 T-Mobile are currently asking for the original CLIQ, which is obviously bulkier than the newer handset but otherwise offers much the same experience. The CLIQ XT fits reasonable in the hand and is certainly more pocketable, but it does feel a little like T-Mobile are treading water having previously led the carrier pack when it comes to Android. It’s not a bad smartphone by any measure, and its media player functionality is ahead of the game when it comes to rivals based on the same platform, but the Motorola CLIQ XT falls short of anything but mid-range, middle of the road mediocrity.