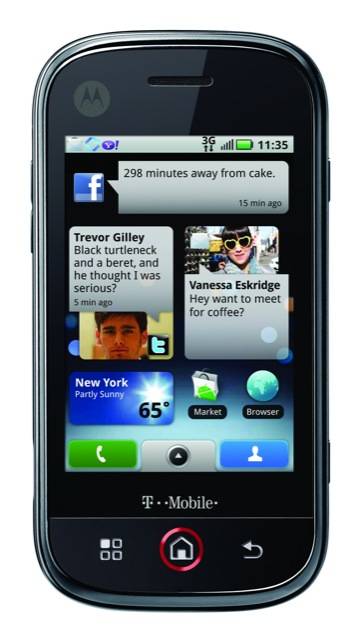 The Motorola CLIQ, with first phone with social skills, is exclusive to the T-Mobile USA network, and will be released in time for the holidays. The CLIQ will be released in two colors: white and titanium. It is able to do high speed internet; has a 5MP camera, auto focus, and video speeds at 24fps; a standard 3.5mm headphone jack; and an HTML browser, delivered by Google. Access to thousands of applications via the Android Market. The phone is customizable, to fit the user, has both WiFi and a slide-out QWERTY keyboard, and a microSD card slot with 2GB card. Click over for live hands-on video of the CLIQ!

The Mobilize event happened today, with some great conversations taking place amongst innovators in the mobile and tech industry. Most of the beginning spoke about location-based services, and how they can impact the consumer, as well as enterprises all over the world. And while LBS is a huge thing now a days, it was all a footnote to what everyone was really waiting for: Motorola’s announcement, regarding their latest handsets, and what they plan to do with a little Operating System known as Android.

Dr. Sanjay K. Jha took the stage to start, ready to talk about the Innovation of Android. Android is a modern, well created mobile operating system. It has a well developed ecosystem that is growing daily. Motorola is supporting the development of Android. A portfolio of devices, to touch on several fronts for users. Browsing the internet, messaging, as well as other features that need to be utilized on a phone, but that may not appeal to some users. 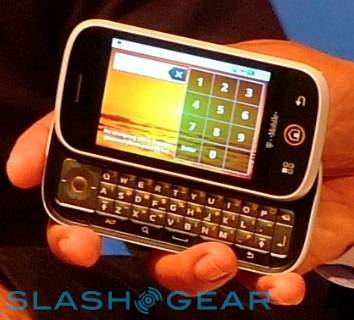 MotoBlur is a feature that blurs the interconnectedness of social media networks, from Facebook, to contacts, messaging, and YouTube. All meant to connect who you know, and to keep them close. It syncs photos, contacts, messages, from services like Gmail, corporate emails, Facebook, Twitter, and automatically serves them on the home screen without any kinds of widgets needing to be opened independently. These widgets are placed on the homescreen, one of three available, and are updated in real time. MotoBlur will also promote the ability to post on a contact’s Facebook page, simply by going to their contact card on the phone. The devices are also worry free, as MotoBlur has a remote wipe service, but that your information is stored on servers, so that it is always safe. Once the user gets a new phone, or replaces their current MotoBlur device, their information is restored to the phone. 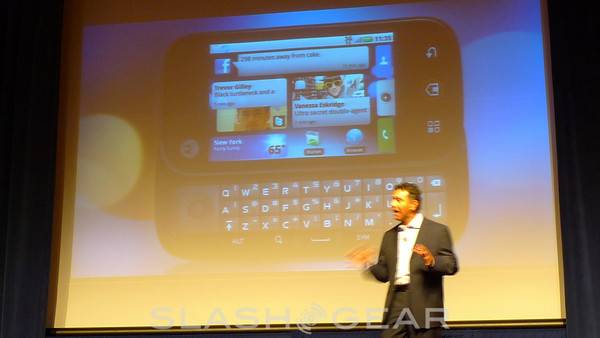 MotoBlur is a global feature, meant to fit on more phones by 2010, which will continue to evolve and build upon the initial release of MotoBlur. The Cliq will also be available around the world, outside of the US, under the name of Dext. Latin America, Spain and the UK will take advantage of the phone’s international releases.

So it looks like the reason T-Mobile didn’t jump on board the HTC Hero is pretty obvious now, as they were siding with the direct competition. Will it be as popular as the SenseUI seemed to be on the Hero? Only time will tell. And thankfully we don’t have any real wait here, as the fourth quarter holiday season is just right around the corner.

SAN FRANCISCO — Sept. 10, 2009 — T-Mobile USA, Inc. today announced the upcoming availability of the Motorola CLIQ™ with MOTOBLUR™, the first Android-powered device from Motorola, Inc. (NYSE: MOT) and the first device to feature the innovative MOTOBLUR solution. The CLIQ will be available exclusively in the U.S. from T-Mobile later this fall.

Developed by Motorola, MOTOBLUR is an innovative solution that manages and integrates communications – from work e-mail to social networking activity – on your CLIQ. Updates to contacts, posts, messages, photos and more are streamed together and synced from sources including Facebook®, Twitter™, MySpace®, Gmail™, and work and personal e-mail. MOTOBLUR automatically delivers these updates to the home screen in easy-to-view streams so there is no need to open and close different mobile applications to keep up with the latest content. A 3G-capable smartphone featuring a slide-out QWERTY keyboard and a full touch-screen display, the CLIQ is designed to keep the conversation moving, enabling fast messaging on the fly and easy navigation through MOTOBLUR’s streams and widgets.

“T-Mobile’s highly social and always-connected customers have a natural affinity for mobile social networking, and we’re excited to feature the Motorola CLIQ with MOTOBLUR prominently in what’s shaping up to be our most innovative holiday product lineup ever,” Brodman said. “The CLIQ lives up to Motorola’s tradition of great design and quality, and to our history of working together to create products that enhance the lives and the relationships of our customers.”

Jha said, “We’re pleased to announce our first Android-powered device in partnership with T-Mobile USA. Motorola CLIQ with MOTOBLUR differentiates the Android experience for consumers by being the only smartphone that automatically syncs conversations, contacts and content, and delivers a solution that’s instinctive, social and smart.”

The CLIQ expands T-Mobile’s compelling lineup of Android devices and underscores T-Mobile’s commitment to the open, highly customizable platform that gives developers and manufacturers the opportunity to create truly unique experiences. This continued first-mover advantage with Android lets T-Mobile customers have access to incredible innovation in the Android Market™.

The CLIQ delivers a reliable mobile Web experience by harnessing the power and speed of T-Mobile’s 3G network and Wi-Fi. Additional CLIQ features include a 3.1-inch HVGA touch-screen display, a 5 megapixel auto focus camera with video capture and playback at 24 frames per second, a 3.5mm headset jack, a music player with pre-loaded Amazon MP3 store application, Shazam, iMeem Mobile, and a pre-installed 2GB microSD memory card with support for up to 32 GB of removable memory.

CLIQ also features multitasking capabilities and one-touch access to the Google™ mobile services millions use every day, including Google Search™ by voice, Google Maps™ with Street View, YouTube™ and Picasa™. Easy access to both personal and corporate e-mail, calendars, and contacts is supported by Exchange Server and Gmail. E-mail and contacts are also supported by Yahoo!, Windows Live Hotmail, and other POP3 and IMAP e-mail services. It also combines instant messaging support for Google Talk™, as well as AOL®, Yahoo! Messenger® and Windows Live Messenger.

Availability
Motorola CLIQ with MOTOBLUR will be available exclusively to T-Mobile customers later this fall in two colors — Titanium and Winter White. Pricing will be announced at a later date. Customers can visit http://www.t-mobile.com/cliq for more information.