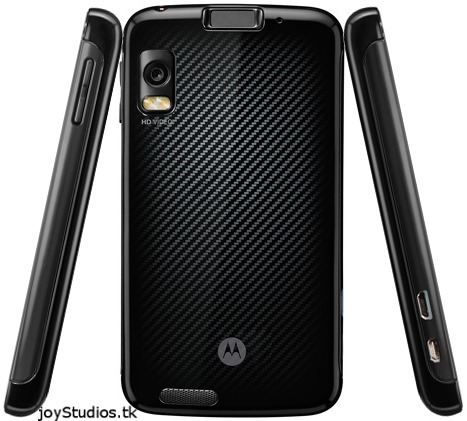 Over on the lovely and wonderfully wishful designers portfolio Joy Studios, makers of such gems as pre-pre-concept visions of Apple iPad 2, Sony Playstation Portable Phone, and the Apple iPhone Nano, they’ve got a brand new bag. This new design is a phone that will run Honeycomb out of the box, making use of Android 3.0 to create what they’re calling the “big brother” of the Motorola ATRIX. This Motorola Bee can record video in full HD 1080p, has a gigantic 4.3 megapixel screen at 1280×720, and of course works with both its own HD Multimedia Dock and Laptop Dock.

You see the similarities to the ATRIX, I’m sure. Or you don’t, but wish you did, therefore take a quick look back at our Motorola ATRIX 4G Hands On and Unboxing post, courtesy of SlashGear. This phone connects to several different media outlets in the same way the ATRIX is being promoted as doing. In addition to the HD Multimedia Dock and the Power Dock, it can plug into a similar Power Dock and has Micro-HDMI output.

Also similar to the ATRIX this phone has a fingerprint scanner for security. Our pal Vince says this feature completely rules. The Motorola Bee has Wifi, Bluetooth 3.0, 3G speed (this is weird considering the 4G speed of the ATRIX,) and 32 GB memory upgradable to 64 GB. The display is AMOLED and has super multi-touch, and there’s a whopping 5 megapixel webcam on the front of the phone for video chat. On the back is a generous 8 megapixel camera with flash, and it just looks very lovely, wouldn’t you agree? — thanks for the tip, Manni!