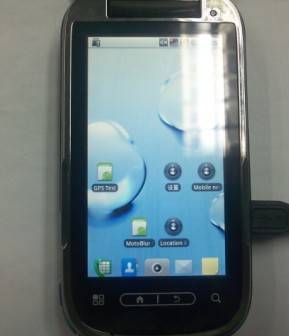 Images of a new Motorola Android smartphone have leaked, with the unnamed model having a flip cover form-factor similar to the Verizon Motorola Krave ZN4.  The touchscreen handset has a transparent cover and a row of touch-sensitive controls; it’s also a MOTOBLUR device, it seems, going from icons on the homescreen.

According to IT168, where the images leaked, the phone is in prototype stage.  Interesting it has dual network indicators showing in the status bar, which some are speculating could mean it has dual-3G capabilities for better coverage.  Other tipped specs include a 5-megapixel camera and 720p HD video recording.

Of course, it could also be a Motorola-styled copy, running a ripped build of the company’s Android OS and themed around their popular Ming/Krave design.