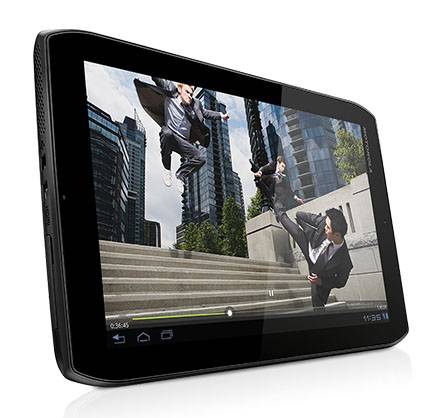 Here’s a nice surprise: in a refreshing bit of post-launch self improvement, Motorola has announced that its XYBOARD 10.1 and 8.2 Android tablets are being upgraded with a spill-proof coating. The change will only affect the WiFi models (at least as far as we know) which will have the same price as they do now: $399.99 for the 8.2-inch 16GB tablet and a hundred bucks more for the 10.1. If you buy them directly form Motorola’s store you’ll also get a free case and HD dock. As far as we know, neither the spill-proof coating or the freebie accessories are being offered for the DROID XYBOARDs, Verizon’s 4G LTE version.

Just for a refresher course, both the XYBOARD 8.2 and its larger 10.1 brother use a 1.2Ghz dual-core processor, 1GB of RAM, 16 GB of storage on the base model with an optional MicroSD card, and 720p LCD screens. The screens themselves use Gorilla Glass like most of Moto’s high-end offerings – combined with a spill-proof coating, that makes them not-quite-rugged, in the same way that the DROID RAZR is. Cameras are 5 megapixels on the rear and 1.3 megapixels on the front, and both tablets get an infrared port for home theater control, though only the XYBOARD 10.1 comes with a capacitive stylus. Motorola’s customized Honeycomb runs on both tablet,s but the company has promised an Ice Cream Sandwich upgrade in (sigh) the third quarter of 2012.

Motorola didn’t say exactly what process it used to coat the tablets, only that it’s a “water repellent nano-coating”. That probably means you’re OK for light rain or a spilled glass, but taking a XYBOARD into the pool would not be a good idea. There’s no word on how the new models would be differentiated from their identically-priced predecessors at retail locations, so if you want the new feature (and some free goodies) you might want to order directly from Motorola’s website.

UPDATE: Apparently the XOOM 2 and XYBOARD models have always been spill-proof, Motorola’s just putting a little extra effort into marketing the feature at the moment. You still get the free case and dock form their website, a value-add that isn’t found elsewhere.