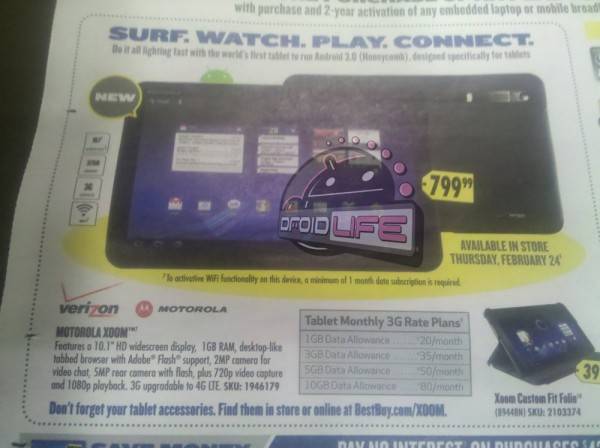 There’s an update to the pricing on the Motorola Xoom tablet that captured everyone’s imagination at CES.  Originally, we reported that it may comein at just under $700,  Well, it’s a bit pricer, as Droid Life has confirmed with the circular below that the price for the Xoom will be a hundred bucks more at $799,  But it gets worse as Motorola is holding customers hostage with a must have data plan to unlock WiFi …

It’s insidious, really.  Best Buy or Motorola will refuse to unlock the WiFi capabilty of the Xoom unless users sign up for the “optional” Verizon data plan at $20 a month with a one month minimum.  Users are free to cancel anytime after that first month.  But why not just charge $20 more and be done with it?  Oh yeah, because at $800 it’s an obscene price point to begin with.

The Xoom will be available at Best Buy beginning Thursday, February 24th.