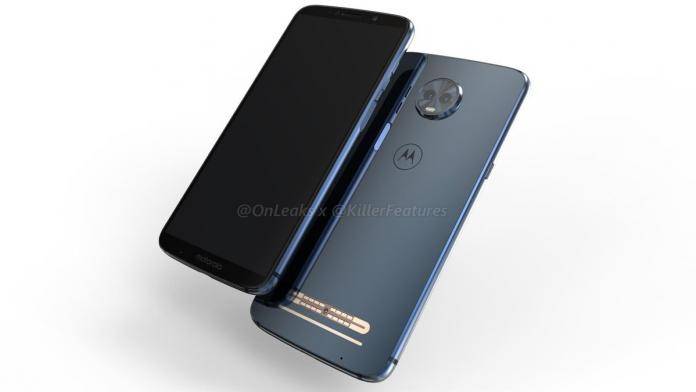 Motorola is set to roll out new Z3 phones but we only have information about the Z3 play. Last week, we learned the phone would arrive with a 6.1-inch display and Snapdragon 636 processor. Some images were leaked and a related device is said to have hit the FCC with a special certification. The phone was sighted as model number XT-1929. It will be a follow-up to the Moto Z2 Play released last year and will be one of Motorola’s headliners for 2018.

Aside from the LG G7, Master Leakster Steve Hemmerstoffer aka Onleaks have released images of the upcoming Moto Z3 play. The phone has yet to be unveiled but below are rendered photos and a 360-degree video. Looking closely at the images, we see a dual camera setup at the rear panel.

Just below the dual cams are the LED flashlight and speaker grilles at the lower part. The phone is believed to sport a 6-inch almost bezel-less display, a fingerprint scanner on the right edge, Motorola logo on the chin, power button on the left edge, and volume rocker on the right. When it comes to dimensions, the phone will measure 156.4 x 76.47mm.

The Moto Z3 Play is also expected to still work with Moto Mods although the Z3 Play may be thicker than the previous model.

Check out the images and video below: