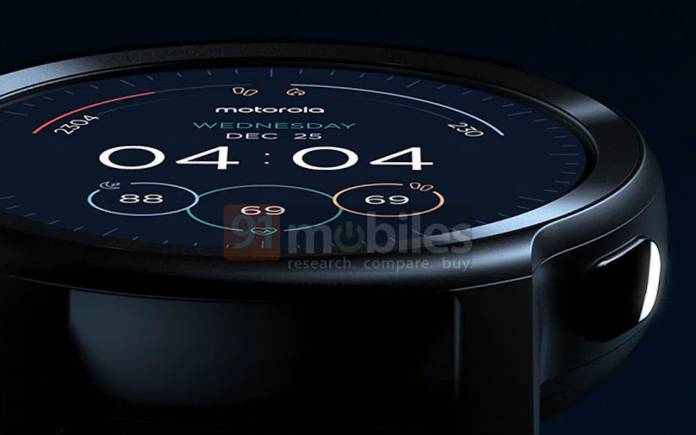 It has been a while since Motorola released a new smartwatch. The company itself isn’t releasing the watch but courtesy of another group. We’re expecting eBuyNow will introduce the wearable device as it did before. The Moto Watch 100 will be the next Motorola smartwatch. The latest we have are specifications and image renders as revealed by a source. The smartwatch will be round once again, measuring 1.35-inches and will come with a heart rate sensor and a 355mAh battery.

The Moto Watch 100 will be part of the budget category. In order to sell a lot, the team behind the smartwatch has to offer it with a more affordable price. The specs have been revealed and we can expect there will be more health-centric features.

The smartwatch will come with two buttons on one side. It will have a matte finish and will look like a premium wearable. The renders tell us the Moto Watch 100 design will be updated.

This Moto Watch 100 design is somewhat minimalistic. There will be no rotating bezel. It will come in an aluminum watch case. The small LCD display will feature 360×360 pixel resolution. It will weigh 29 grams and measure 42x46x11.9mm while the band will be 20mm.

We can also look forward to Bluetooth 5.0 connectivity,and GPS. The usual sensors will be present: SP02, HRM, gyroscope, accelerometer, ambient light sensors, and heart rate sensor. It works as a step-counter and sleep trackers.

When it comes to production, the Moto Watch 100 may be produced starting this month. Details are scarce but we’re hoping to know if this smartwatch will use Wear OS. The budget smartwatch will be affordable but its design will be premium. Mass production of the watch may begin this year which means release will also be this month or in December.