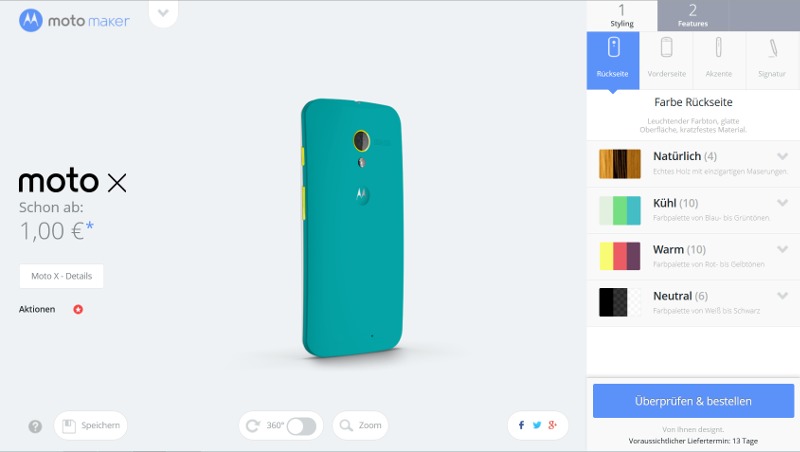 As promised before, Motorola somewhat quietly launched the Moto Maker site in Germany. This is the first time that the Moto X customization service has been made available outside of the US, potentially sending mixed signals about the future of the current flagship as well as the upcoming smartphone currently dubbed the Moto X+1.

When Google shut down its Texas Moto X production site, it was theorized that Moto Maker is on the last leg of its existence since it was there that the US-made devices were born. Motorola, of course, assured the public that Moto Maker would continue and would in fact expand to Mexico and Western Europe. But there wasn’t any solid proof of that promise until now. Motorola, and Lenovo, is expanding Moto Maker globally starting with Germany. Residents of that region can now buy their dream Moto X configuration from carrier Phone House, with all the bells and whistles that their US counterparts had access to, including wood back covers.

Of course the question now would be “why only now?” The Moto X has had almost a full year of existence unchallenged by anything from Motorola’s ranks and is long overdue a successor. The usual business practice would be to dial down production a bit for an outgoing standard bearer, not to ramp up international availability, especially of this sort. Perhaps Motorola only got the chance to spread abroad now that Lenovo is in charge. Or perhaps the Moto X is due for a longer term than we expected.

There is also another possibility. Motorola and Lenovo might be testing the waters and flexing their muscles in making the Moto Maker service available outside the US in lieu of future devices. There has been speculation that the Moto X+1 will also have Moto Maker options, and the manufacturer might very well be eying an international availability from the get go. There is also that rumor that the Moto 360 smartwatch will also customizable via the web service, which could also benefit with a global launch from day one.