Motorola definitely knows how to prioritize the needs of people. Aside from launching some of the best smartphones in the market today, the company has allowed customers to personAlize their units with the Moto Maker. Choose the color and material you want so you can have your own unique Moto phone. And then there’s the fact that some models like the Moto G4 comes unlocked so you can have the freedom to choose the mobile carrier you like.

Not all phones are unlocked but a lot of people prefer to get such where they can switch to any carrier. Being unlocked is one important feature that people care about. They want it for their devices so they won’t have any problem if they suddenly go out of coverage or go to another country.

Motorola recently did a survey in the US to determine what the American smartphone users know about a handset being unlocked. The company found out that there are several misconceptions about what an unlocked phone is or what are the advantages of a universally unlocked phone.

Motorola made an infographic to present the findings and inform the public. 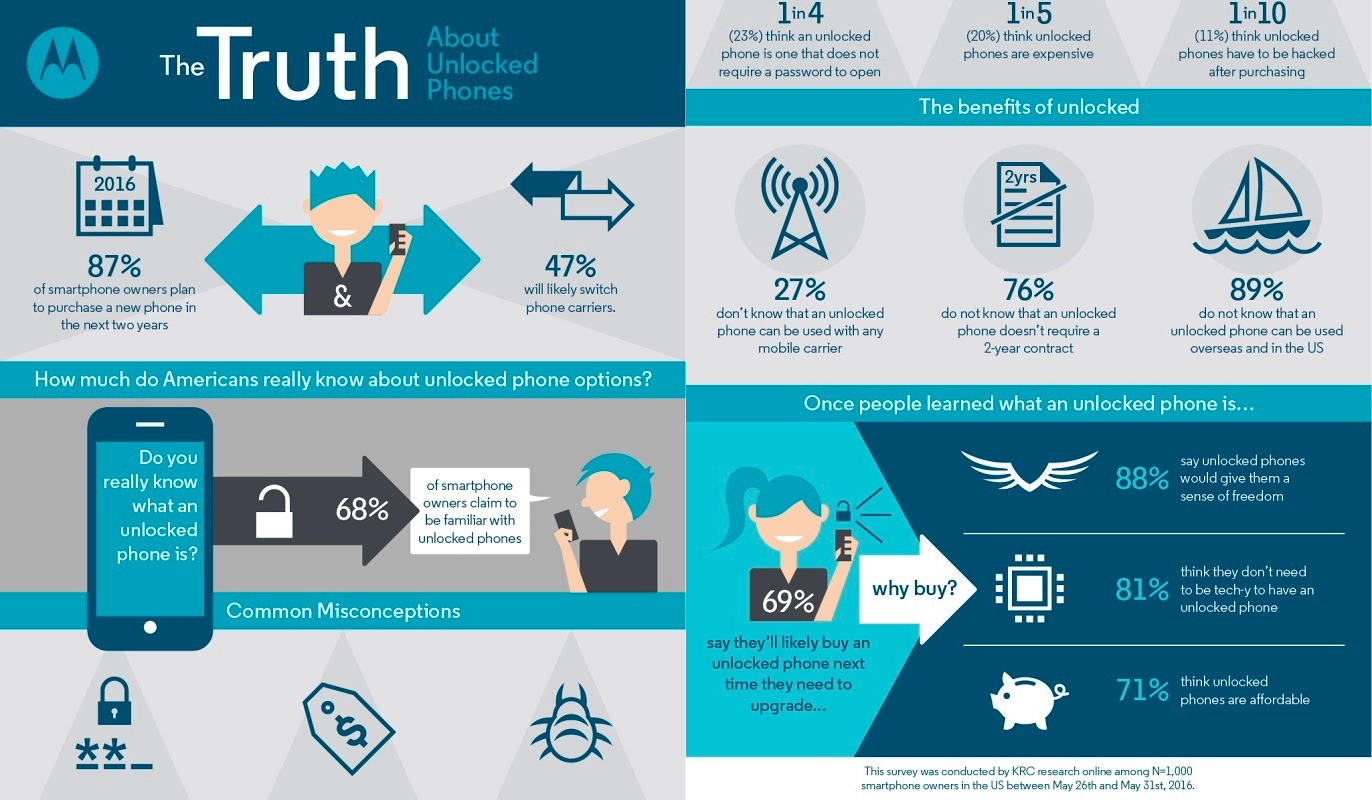 Majority of smartphone owners, about 87%, plan to purchase a new phone in the next two years. Forty-seven percent (47%) said they will likely switch carriers. Sixty-eight percent (68%) of the smartphone owners surveyed claimed to be familiar with unlocked phones.

Common misconceptions of the smartphone owners Motorola noted include the thinking that an unlocked phone is one that doesn’t require a password to open (about 1 in 4 or 23%). One in five people (20%) think unlocked phones are expensive. About eleven percent (11%)  also think that unlocked phones have to be hacked after purchasing.

The survey also tells us that 69% of people will likely buy an unlocked phone next time they need to upgrade.

Motorola offers Moto G universally unlocked in the country. You can use it with whatever mobile carrier of your choice. You can use your old prepaid SIM or use it with your current mobile plan. It’s currently sold for $199.99 while the Moto G Plus will be $249.99 on retailers like Amazon, Best Buy, Car Toys, MicroCenter, Fry’s Sam’s Club, Walmart.com, and B&H. You can now pre-order for the Moto G phones on Motorola.com and beginning July 28 on Republic Wireless.