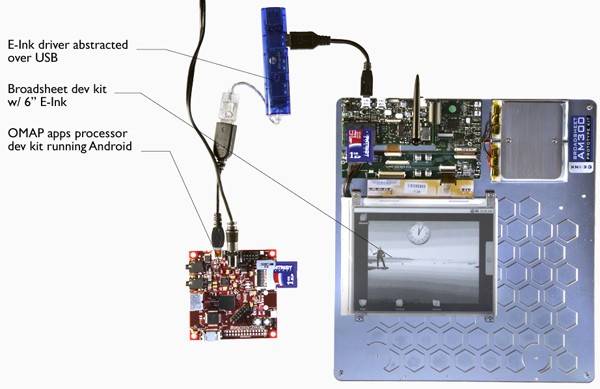 The Moto Development Group have created an Android-based e-ink display, which could eventually become an e-book reader based on Google’s open-source platform.  The reference design uses an E-Ink Broadsheet development kit, complete with a 6-inch display panel, interfacing with an OMAP-based dev kit running Android.

Moto – not to be confused with Motorola, the two are different organizations – is currently developing customized versions of Android suitable for embedded applications such as this.  In fact it’s likely to be one of many developers doing a similar thing: the recent rumors out of the Android camp, which tipped China as a hot-bed of Android development, likely stems from the cost advantages of moving away from Windows CE licences to the free Google platform.

Right now the reference design needs some work before it could enter prototype stage, not least to address e-ink’s screen-blackout when refreshing.  However it does suggest a new generation of internet-connected ebook readers that, like the Amazon Kindle, can download content but, unlike the Kindle, aren’t hemmed into a relatively closed information ecosystem.