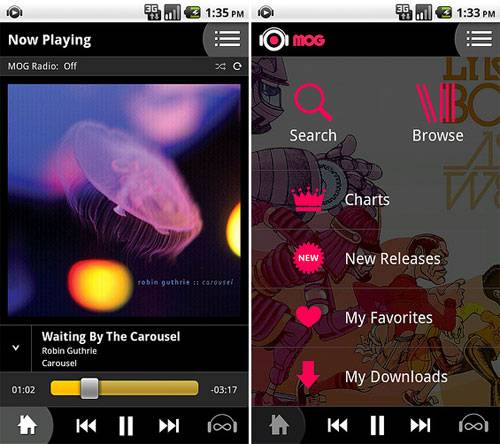 If you are a big fan of music on your Android device, a new app for your smartphone called MOG has left beta status for the Android platform. The app is designed for easy to use music listening experience for music fans and it has some new features now that it has left beta.

The MOG app has a now playing screen in the upper right corner to give details on the track being listened too. The app also has a seek within a song feature to let you find the specific spot you want. Other features include the basic shuffle and repeat feature and you can add or remove tracks from the favorites menu.

The skin of the app has been redesigned and the app has a new home page. The app has also been improved for better stability and it has lots more new features. The company behind the MOG app says that more updates are coming soon as well with playlist creation and more. If you have the beta version you can hit update and get the new version now and the new version is on the Android Market now.