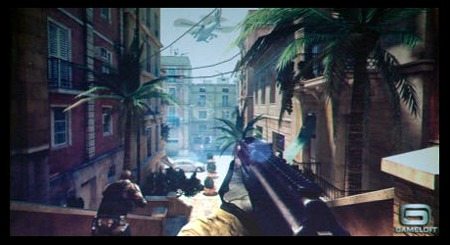 Gameloft‘s Modern Combat series is an epic first-person shooter that has some awesome 3D graphics that are simply stunning for a mobile game. When we saw Modern Combat 3, we had no idea how the developers could ever top it, but it looks like they’re attempting to do that, with their upcoming sequel, Modern Combat 4: Zero Hour. Details about the upcoming game were leaked out today.

A trailer and a few images were shown at a private Gameloft press event at this year’s Tokyo Game Show. The trailer features a news report that discusses the kidnapping of fictional US president Burke. There’s also a quick bio of Edward Page, who is an ex-US Ranger and member of the K.P.R. Alliance who was featured in the previous installment of Modern Combat. He’s been pinpointed as the suspect in MC4.

We then see a few seconds of gameplay showing a city square with two helicopters crossing paths, with a voiceover saying, “Walk away with blood on your hands.” We’re sure this game will be a doozy and hopefully we’ll get even more details on it soon before it launches, like better screenshots and higher-quality trailer.

The end of the trailer shows that Modern Combat 4: Zero Hour will be available on Android and iOS sometime in the “Autumn”, which could either mean tomorrow or even a couple months from now. Either way, all first-person shooter junkies should be on the lookout for this new sequel to hit any time now.