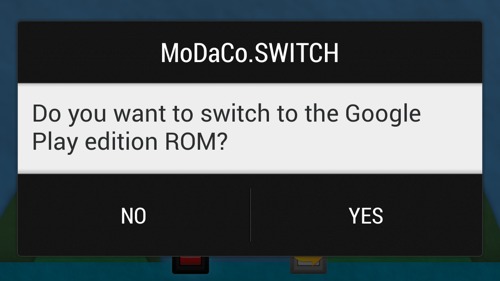 The MoDaCo.SWITCH ROM for the HTC One has been progressing through the beta phase for a little while now. And as we had seen in the past, a separate version was in the works for the Samsung Galaxy S 4. This ROM had launched as an Indiegogo project and in a bit of good news for those who backed the campaign — beta 1 will be arriving today.

More to the point, Paul O’Brien from MoDaCo has released a demo video showing the ROM running on a Galaxy S 4 and also released beta 1. The video can be seen here in the post and clocks in at just shy of 3 minutes and 30 seconds. The video offers a look at how this all works — basically, it shows how you can easily jump between TouchWiz and a stock Google Experience.

The ROM has a few special apps included such as SwitchUp which will look for and allow users to grab over-the-air updates. The other app is Switch and this is the one that allows the user to jump between TouchWiz and a Google Experience. A tap of the Switch app brings a pop-up that allows you to switch by tapping the “yes” button.

Similar to what we saw with the HTC One running MoDaCo.SWITCH — this allows you to have two ROMs setup and running with both sharing the same data set. This ROM is said to be based on a European Samsung Galaxy S 4 i9505 and as a result — this is available for GSM devices only.

Otherwise, one important item to keep in mind is that this beta 1 release is being made available only for the Indiegogo backers. So far we have yet to see any timeline as to when this will be released for non-backers. That all being said, if you backed the “MoDaCo.SWITCH for the Galaxy S4” Indiegogo campaign — you may want to check your email as that is where the download link can be found.