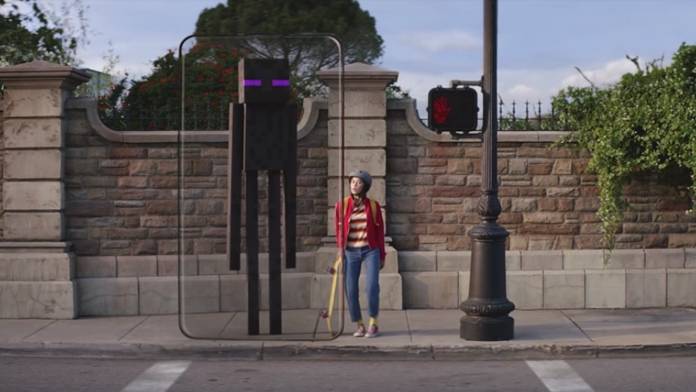 A couple of weeks ago, Microsoft teased the upcoming Minecraft game. It’s not the first mobile game of the popular franchise but it will be the first to deliver a full augmented reality experience. This is different from the ‘Minecraft: Pocket Edition’ but it can be likened more to the Pokemon GO adventure. The new game will be out in time for the 10th Anniversary of Minecraft. The upcoming AR game will be officially called the Minecraft Earth. Not many details have been provided but the trailer video gives us an idea of how we can enjoy the new AR game.

We still have no knowledge of the gameplay but we’re looking forward to the new Minecraft AR experience. Many people have probably thought of this before so it’s not surprising it’s about to become a reality.

Mojang and Microsoft have been working on this one. The game will be all about the Minecraft world being integrated with the real world. We’re guessing we’ll be seeing the familiar Minecraft items, settings, and characters in our real environment.

In Minecraft Earth, players are said to get into battle and be able to collect mobs like in the original game. The mobs may be able to populate the builds but with some limitations.

Minecraft Earth may be free-to-play but we can expect a premium version. Of course, Microsoft and Mojang need to make money. A late summer release may be expected but it could still be a closed beta version not only for Android but also for iOS.

Feel free to sign-up on Minecraft Earth’s official website HERE. Your smartphone should run at least Android 7.0 Nougat. Make sure you have a Microsoft or Xbox Like account ready together with your Play Store login. Once sign-up is done, you will be eligible to get free skin. Instructions on how to claim the freebie will be sent immediately.