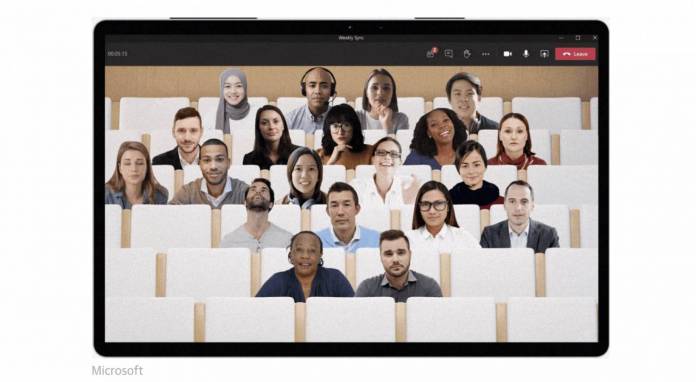 Even though video call tools have helped us connect with loved ones during this time of lockdowns and quarantines, it sometimes feels weird to see all participants in different squares on your screen. Microsoft realized that too and so introduced something called Together Mode to its Teams video calling app. With the power of AI, this mode is able to place all participants in a call inside a shared background. Now they’re bringing this unique feature to their other communications app, Skype.

You may find Together Mode to be weird, creepy, cute, or just a unique way to take on video calls if you’re tired of all the squares and grids that are keeping you apart. When you turn this mode on, it will remove the background elements from each of your feed and the AI-powered tool then brings you all together in a shared background. They say the arrangement is more “natural” compared to the normal video feed windows that we see.

Initially, it was only available on Microsoft Teams but now they’ve also added it to Skype as more families and friends will most likely use the latter during this holiday season. This will be available for Skype 8.67 as it’s included in the release notes. They also mentioned a Large Grid Mode so you can everyone’s video stream at the same time. You will also now be able to add a user to an ongoing call through your phone number. There are also some new background categories and new backgrounds as well.

We’ve seen how the Together Mode looks like in Teams and it will probably be the same as with Skype. As to whether this is more natural than the one where we all seem isolated in our own windows, that is still up for debate. Some may say that the video “cutouts” of ourselves seem to be more unnatural when placed in a stadium or room or whatever background you choose. We’ve gotten so used to our squares so seeing this may seem weird at first.

Expect more new features to be announced by various video calling apps as we get closer to the actual holidays. The question is would people be willing to try something new or just stick to what they’re used to on Zoom or Messenger.