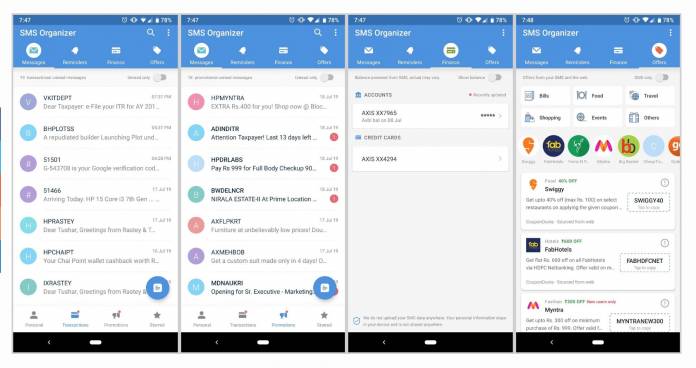 You’ve probably gotten used to having your emails automatically sorted into categories with apps like Gmail, Yahoo, Outlook, etc. But what if you could do the same to your text messages? Microsoft, which has been releasing a lot of apps for the Android platform, previously launched an app called SMS Organizer in India, and now finally they’re releasing it in other regions. So far, it’s available in the US, UK, and Australia and hopefully, they will release it in more territories over the next few days.

If it’s the first time you’re hearing about the app, SMS Organizer was developed under the Microsoft Garage program which lets employees tinker around with experimental apps before releasing it to the wild. It uses machine learning to understand the context of the messages and then sorts them into various categories automatically. You will see individual tabs at the bottom of the app, like personal, transaction, promotion.

Even better news, the app will not notify you if the SMS you receive is a promotional one. But if your message is about a bill payment you must make or about a flight or reservation you made, it will notify you and even remind you if your payment is already due. Reminders are located at the top of the app, beside Messages, Finance, and Offers. You just swipe left or right to switch between these tabs. Offers is for those discounts and coupon codes that you might receive.

The app also lets you backup and restore your messages through Google Drive. You can always opt-out if you decide you don’t want a backup, but most will probably want to use that feature especially if you’re planning to upgrade your phone and you don’t want to lose all your messages. Note that the app’s categorization will only work for SMS and not MMS.

According to XDA Developers, the app seems to be available now in several countries including the US, UK, and Australia and of course the original country where it launched, India. You will need to register with your mobile number so even if you have an APK, it probably won’t work for you.